The History of Interior Design as “Neglected Stepchild”? 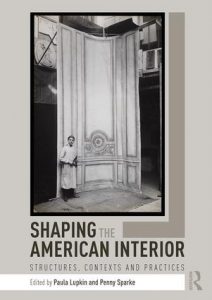 In the introduction to the new edited collection Shaping the American Interior: Structure, Contexts, and Practices, Paula Lupkin and Penny Sparke declare that “the history of interior design practice in the United States is still in its infancy, a neglected stepchild amongst related disciplines like architecture and industrial design.” They note, however, that things are beginning to change, as scholars approach the design of the interior “as a collaborative modern enterprise comprising art, design, manufacture, commerce, and identity construction.” In previous blog posts, Imogen Hart commented upon the challenges and rewards of considering the interior, especially in the classroom, while Hollis Clayson noted the ways in which the domestic interior can be complicated by the uncomfortable and the uncanny. Lupkin and Sparke’s mixed metaphor of infancy and family estrangement led me to consider whether or not we might say the same for the history of interior design in Britain. What questions are raised by current scholarship? 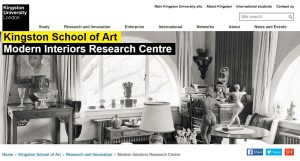 The historian Jane Hamlett, for one, would concur with the theme of neglect. In a review essay entitled “The British Domestic Interior and Social and Cultural History” for Cultural and Social History in 2009, she notes that “for much of the twentieth century, the domestic interior has been on the sidelines of social and cultural history.” She cites the year 2000 as a watershed, marking a shift in attitudes towards the modern history of consumption and a rejuvenated debate over the spheres of “public” and “private” in historical terms, notable for the establishment of the Centre for the Study of the Domestic Interior, a joint venture between the V&A, the Royal College of Art and Design, and Royal Holloway. (the Modern Interiors Research Centre began in 2005 at Kingston University). Hamlett goes on to consider key strands of scholarship that address three important areas: space, especially in relation to social practice, the social role of objects, and the study of consumption.* While “space” charts interdisciplinary terrain with architectural history (a major concern of Shaping the American Interior), the central place of objects marks an affinity with material culture studies, and her essay includes a renewed call for historians to attend to material objects. Also in 2009, Routledge published History and Material Culture: A Student’s Guide to Approaching Alternative Sources, edited by Karen Harvey. In her introduction, Harvey notes that “material culture is one important key to unlocking the everyday lives of people, balancing social and cultural contexts with the physical facts of things; and it can free historians to recast historical narratives, sometimes challenging historical orthodoxy.” The range of topics and disciplinary approaches in the volume–from textiles in the Atlantic World c. 1500 to material culture and modernity in China–suggest the richness and diversity of this approach. 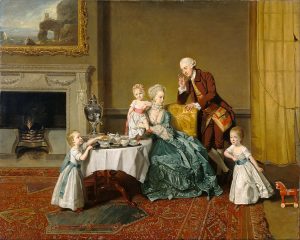 More recently, studies have turned to the intersection of the interior and interiority, as suggested, for example, by the volume Interiors and Interiority edited by Eva Lajer-Burcharth and Beate Söntgen published in 2015 and a series of papers edited by Vlad Ionescu and published in 2018 as Interiorities: Artistic, Conceptual, and Historical Reassessments of the Interior. The latter is more explicit about the disciplinary relationship to architectural practice and the history of architecture, making the bold claim: “we argue that the interior is a moment when a building receives its cultural significance.” It is only through the interior, in other words, that architecture can function within the realm of meaning. For this reason, Ionescu believes that that “the interior has always been indistinguishable from people’s inner life–let us call it their interiority” (italics in the original). In their introduction, on the other hand, Lajer-Burcharth and Söntgen provide four genealogies for the relationship between the interior and interiority. The first is literary, linked to the birth of auto-biography that goes back to Augustine’s Confessions, while the second is pictorial, based on the understanding of the self as an interior space, as in seventeenth-century Dutch painting. Architectural space and its role in subject formation comprises the third narrative, one generated by the eighteenth century interest in discrete and individualized spaces. In her consideration of the conversation piece in Georgian England, art historian Kate Retford reminds readers that the ideal of “interiority” is a product of the Enlightenment ideal of sensibility. She notes that around 1760, a distinction can be made between the interior and interiority, as least in the depiction of interiors found in conversation pieces: while earlier scenes “were to be understood as signifiers of abstract virtues,” later conversation pieces combined “lavish descriptions of things with a new sense of intimacy and affect.”  In other words, they were scenes of interiority. The final genealogy discussed by Lajer-Burcharth and Söntgen is the psychoanalytic model: the mind as interior space, as in Freud, as well as Lacan’s theory of subject formation in visual and spatial terms. The essays in the volume Interior and Interiority are informed by these genealogies, even as they seek to “offer new insights into the nature of the mutual dependence between these two notions.”

This turn towards Interiority raises key questions that need further exploration: one, how do we recover the “intimacy and affect” of the past, and, two, whose interiority are we seeking to recover? Retford’s argument hinges upon the representation of the interior. In other words, we may never be able to recover how Lord Willoughby de Broke felt in his home, but we can interpret how it is represented by Zoffany. Other studies have turned to literature in order to recover a historical understanding of the private self, as in, for example, Victoria Rosner’s Modernism and the Architecture of Private Life, where modernist literature is conjoined with the interior “in the creation of am experimental, embodied, and unstructured private life.” For art historians, at least, the exploration of these and other themes has almost exclusively addressed elite homes. 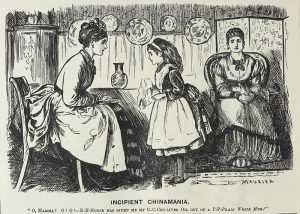 What to say about the middle class homes, not to mention the homes of the poor, especially in relation to class, taste, and aesthetic choice?  Kate Roach has previously raised this concern in a blog post, and a future post will further probe this question. Could it be that such a child existed in the 1870s, as parodied in George du Maurier’s cartoon for Punch, that complained of taking her medicine from a plain mug?

*Hamlett notes that these themes have “important implications for the history of women and gender.”  We will take up this point in a later post.

Next: CFP: Collecting Studies for the 21st Century: Circulation & Disruption