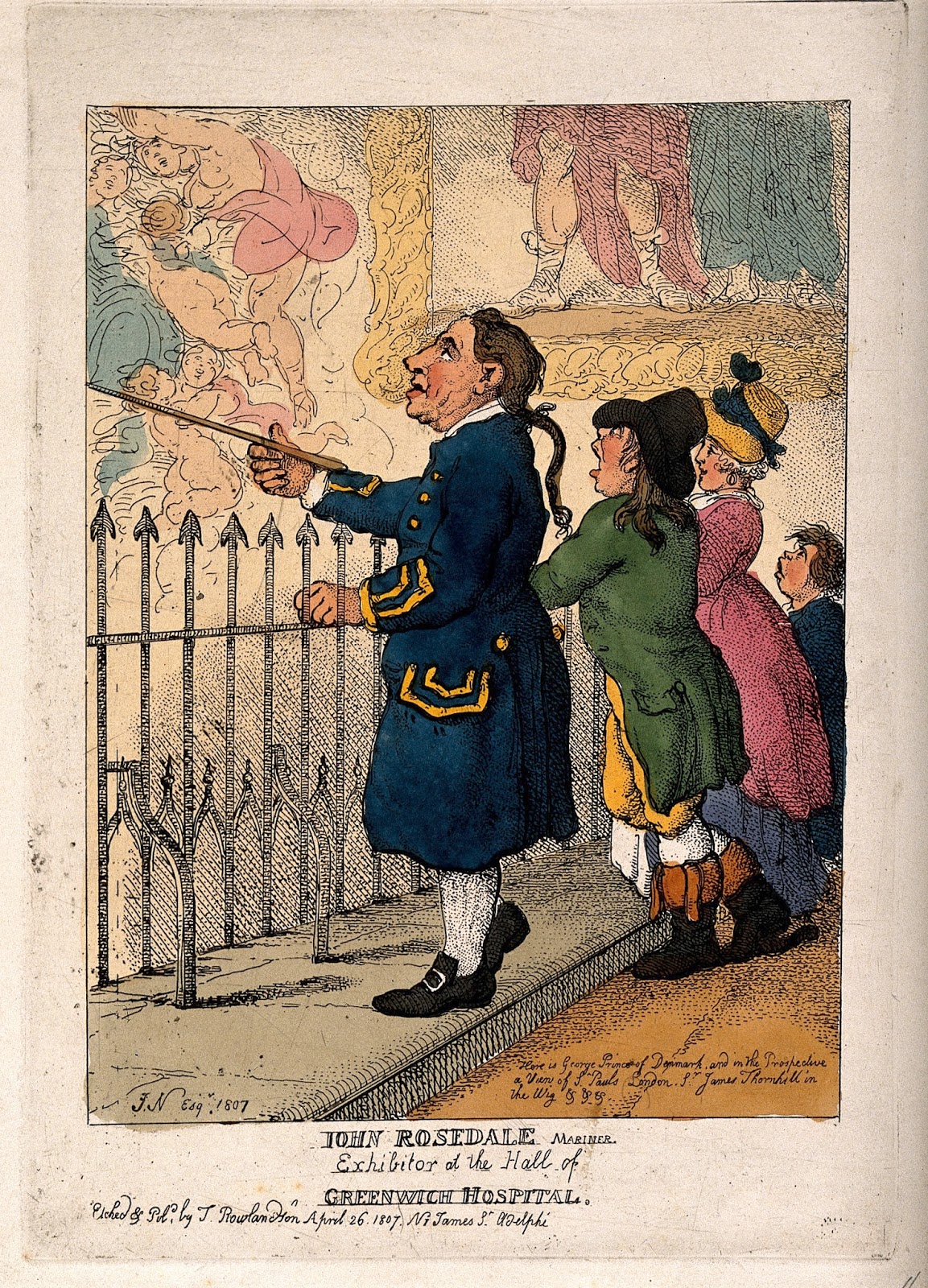 A Greenwich Pensioner showing the Thornhill decorations in the Painted Hall to a family of visitors. Coloured etching by T. Rowlandson after [J. N.] Esq, 1807. Courtesy of the Wellcome Institute.

Editors’ Note: Catherine Roach is an Assistant Professor of the History of Art at Virginia Commonwealth University. Her first book, “Pictures-within-Pictures in Nineteenth-Century Britain,” is forthcoming from Ashgate Press. She is currently working on a history of the British Institution.

In a recent post on this site, Morna O’Neill and Anne Nellis Richter asked, “can the history of collecting ever escape its class position?” No, it can’t. Social status, as they point out, was (and is) a prime motivator for collectors. This applies to the macramé enthusiast just as much as to the robber baron. But can the history of collecting be something other than the unselfconscious admiration of elite practices? Can we avoid perpetuating the values of the collectors whom we study? The answer to that question, I believe, is yes.

First, we should admit the challenges we are up against. Historic collections (and their present-day avatars, historic homes) are seductive. This field of study offers imaginative possession of desirable ensembles. In this, we are all like Eliza Bennet at Pemberley, imagining what we could have been mistress of, if things had been different. But, as curators of historic homes have come to realize in recent years, history need not be sanitized to interest visitors, or to interest us. Displays in historic homes have begun, haltingly but laudably, to grapple with the social systems that made such dwellings possible, including the enslavement of millions of people. The history of collecting can do the same.

In eighteenth- and nineteenth-century Britain, elite collections were often interpreted by working-class individuals. In country houses, groups of visitors were shown around by servants such as housekeepers. These interpreters typically lived on site, but can they be thought of as being at home in the country houses in which they worked? Further, how did they present the not-homes in which they lived to their audiences? They are best known to historians of collecting through visitors’ complaints about the necessity of tipping them. Such complaints are so familiar that we often forget to interrogate them, but they point to an important reality about the experience of visiting elite country homes: often, the encounter of the space was mediated not by the owner but by an employee. These working-class interpreters were employees twice over, as servants of the house who were also temporarily engaged as tour guides. The power dynamics of such encounters were complex indeed. House servants were technically outranked by visitors, from whom they hoped to extract gratuities. Yet, as representatives of the owner, they also had the authority to deny entrance and police behavior. Evidence about the commentary they provided is scarce, but not entirely absent: in addition to letters and journals of house visitors, interpretive tools also survive, such as the catalogue of Strawberry Hill annotated by Horace Walpole for his housekeeper’s use.

Working-class interpreters can also be found in urban spaces of display, if we look for them. Since the early eighteenth century, tourists had visited Greenwich Hospital, a state-run refuge for elderly and disabled naval veterans, known as pensioners. Some of these pensioners acted as guides in the Hospital’s Painted Hall, which was decorated with murals by James Thornhill. In 1824, the Painted Hall was transformed into a new attraction: the Naval Gallery, a public museum of paintings, sculpture, and relics celebrating naval achievement. Its first curator (in all but title) was the Hospital’s Secretary, Edward Hawke Locker, who lived on site surrounded by an impressive domestic art collection that I have discussed elsewhere (“Domestic Display and Imperial Identity: A Visual Record of the Art Collections of Edward Hawke Locker,” Huntington Library Quarterly 75, no. 3 (Autumn 2012): 411-428). It was Locker who arranged the Naval Gallery’s contents, but they were interpreted for visitors by the Hospital’s residents, the pensioners. Greenwich Hospital was the pensioners’ home, albeit an institutional home that lacked many domestic comforts, including the right to co-habit with one’s family. Surviving accounts of visits to the Hospital often stress the pensioners’ presumptuousness, suggesting that they asserted a sense of ownership not only over the space of the Naval Gallery but also over the right to interpret its contents.

We might also examine historical figures with working-class origins who used the practices of collecting to manage newfound social status. One example is Emma, Lady Hamilton, who had not been born to a title but acquired one through marriage. The daughter of a blacksmith, she became the wife of an ambassador and the lover of the most renowned naval leader of the day, Admiral Horatio Nelson. She was in charge of the decoration of Nelson’s country home of Merton, as I discuss in a forthcoming essay, “‘My Hero’: Women, the Navy, and the Domestic Display of Marine Battle Paintings,” in Spreading Canvas: Eighteenth-Century British Marine Painting, ed. Eleanor Hughes (New Haven and London: Yale University Press, forthcoming 2016). There, she combined relics and prints of Nelson’s battles with multiple portraits of herself and of him; indeed, the house contained so many portraits of Nelson that one observer described it as a “mere looking-glass” for the famous admiral. Yet they also reflected Lady Hamilton’s desired self-image. These interiors were then animated through the presence and conversation of the very people they repeatedly represented. Although criticized as excessive by some, Merton’s collections helped Lady Hamilton navigate her ambiguous social position as an acknowledged partner who was not a wife, and as the lady of a house to which she had no legal claim.

Previous: The Whiteladies House: Interwar ambitions for modern art in the modern home

Next: Velvet Paintings: The Perfect Art for the 18th-Century Home?