The Whiteladies House: Interwar ambitions for modern art in the modern home 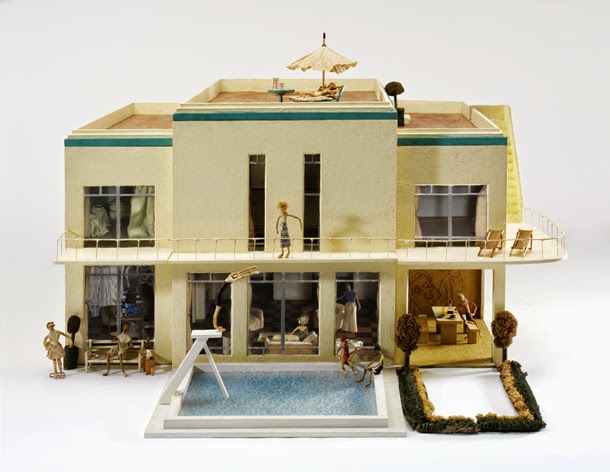 The Whiteladies House is a dollhouse designed in 1935 by Hampstead resident Moray Thomas, born Lillian Marie Pullen in 1883, and built by her chauffeur (and talented carpenter) William Purse. Whiteladies House is featured in the current exhibition “Small Stories: At Home in a Dolls’ House” at the V&A Museum of Childhood. The V&A exhibition provides a timely opportunity to explore both the opportunities and methodological issues presented by using dollhouses to study the display of art in historical interiors.

Thomas intended her creation to model the benefits of the modern architecture and interior design being enjoyed by a social elite of bright young things. Thomas’ approach was coeval with a nation-wide movement to promote good design for the home to the middle classes. For example, in 1934 ceramicist Clarice Cliff directed a selling exhibition at Harrods called ‘Modern Art for the Table’, which featured affordable glass and ceramic tableware designed by popular artists. This government-encouraged enterprise claims a lineage from Morris’ Arts and Crafts principles of utility, beauty and domestic pleasure, and often utilised English country garden motifs; however, its products were industrially manufactured and drew on modernist design.

When it was first displayed to the public in 1936, Whiteladies House was accompanied by a small pamphlet detailing its historically-educative purpose and its features. Thomas wrote that it was intended:

to record in miniature the habits, homes, tastes and ideas of the people of today – the young people who are unhampered by choice possessions of old furniture or by old conventions of drawing rooms, calling hours, formal manners or privacy.

With uncanny prescience, she described these youths as ‘A generation bred in one war and living its little time of sunshine to the full before the next.’ The house was displayed to raise funds for the Bond Street Ward of the Middlesex Hospital alongside an exhibition of designs by women architects, before being donated to the V&A, where it was displayed later the same year before being consigned to the stores until the mid-1980s.

I became interested in the relationship between linocut artist Claude Flight’s mural contribution to the Whiteladies House and his practice as an interior designer – which included painting murals in the homes of private clients. At the Omega Workshops of the 1910s, murals had been emblematic of the brand’s spontaneous and uninhibited approach to art-making in modernist domestic interiors, and photographs of Flight’s works display both a similar joie de vivre and use of ‘decorative abstract patterns of color [sic].’

Flight taught linocutting at the Grosvenor School of art in the late 1920s, and his passion for the medium went hand-in-hand with his belief that this affordable new artform was ideal for display in contemporary working class homes. Having ‘volunteered as a farrier and subsequently became a captain in the Army Service Corps in France’, Flight numbered amongst the more senior members of Moray’s ‘sunshine’ generation. 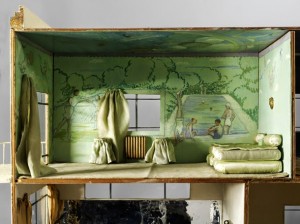 No information exists on exactly which of the numerous murals in the Whiteladies House Flight was responsible for, so curator Alice Sage invited me to come to the Museum of Childhood to look closely as the house. There, we identified three distinct hands. We believe that, as stated in Moray’s pamphlet, the works in the open plan living room are by Patrick Millard. The murals in the master bedroom – where the walls depict the residents swimming and playing tennis, and the history of flight from myth to modernity is arrayed across the ceiling – are more difficult to attribute. Their precise realist style is very different from Flight’s linocuts, e.g. Boys Bathing c.1935, however, the subject matter and modelling of the figures is noticeably similar to a watercolour, Swimming Pool, painted in 1933. 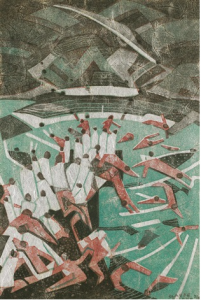 We suspect that they may have been worked by Moray, who described herself as an artist on the 1911 census, as the use of colour and line seems more careful and less expressive than most of Flight’s work. Finally the stylised forms of the boldly outlined mural in the loggia – which Alice Sage has identified in her article on the Whiteladies House as being very close to the stone dining room by Oliver Hill and Eric Gill shown at the 1933 Exhibition of British Industrial Art in Relation to the Home – depicting two female nudes correlates to many of Flight’s linocut nudes, including the Four Seasons series c.1926, particularly Spring, and Persuasion and Discussion c.1929.

Although the Whiteladies House is far from representative of the lives of the majority of Brits in 1935, together with Claude Flight’s idealistic writings about the potential role of the linocut, it provides a taste of an interwar ‘little time of sunshine’, when artists hoped that art would begin to play a vital function in contemporary homes.

Next: Working-Class Interpreters of Elite Collections