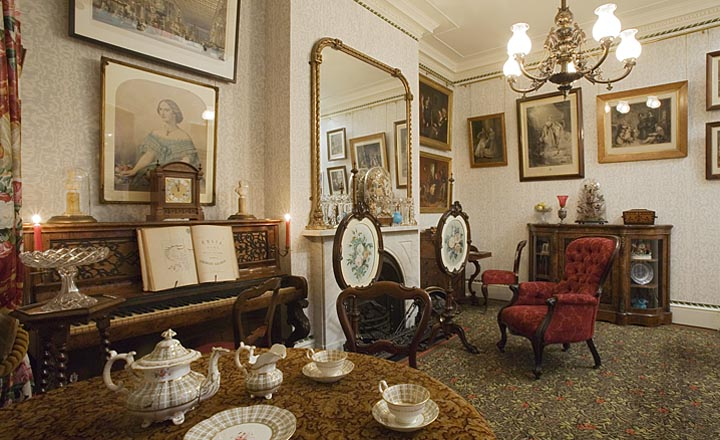 View of the “Drawing Room in 1870” in the Geffrye Museum. Photography by John Hammond/Geffrye Museum of the Home

We’d like to use this space on occasion to highlight exhibitions or resources of particular interest for the history of display in private interiors. First up today is the Geffrye Museum in the Hoxton area of London, also known as the “Museum of the Home”. The Geffrye, founded in 1914, occupies an eighteenth-century almshouse that once belonged to the Ironmongers’ Company. Its preservation and transformation into a museum dedicated to the history of middle-class interiors was an outgrowth of the Arts and Crafts Movement, which sought to understand better the historic settings of domestic life.

In our last post, we discussed some of the obstacles facing art historians who want to think about the display of art in the homes of middle- or even lower-class people. The collections of the Geffrye Museum are an important resource for those wishing to look in greater depth at the interiors of non-elite dwellings. The Geffrye’s public exhibition spaces present a series of period rooms which attempt to accurately recreate the interior decoration, furnishing, and, to some extent, use of middle-class dwellings in London. The museum’s history of private interiors stretches back as far as 1630, beginning with a Hall re-created from a dwelling that had survived the Great Fire of 1666, and comes up almost to the 21st century, with a re-creation of a 1990s loft apartment.

In one sense, the founding of the Geffrye marks the beginning of the period in which we can understand the private interior as a “historical” space. One of the difficulties in using such spaces to study the way art appeared in such interiors in the past is that they tend to preserve idealized examples rather than the highly-particular and continually-evolving examples in which actual artworks were displayed. One of the goals of Home Subjects is to understand the lived experience of the art displayed in such spaces, rather than to regard them as static and unchanging representatives of “period style”. Nevertheless, the Geffrye Museum’s period interiors are important and deeply researched reconstructions of the types of decoration and furnishing a typical middle-class family may have employed in the periods they represent. As such, they provide an important point of departure for the study of particular room types, of the display of specific genres of art, or the display of artworks of particular media. 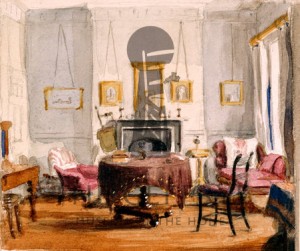 The Drawing Room at 59 Seymour Street, by Matilda Sharpe, c.1850, watercolour/Geffrye Museum of the Home

In addition to its period interiors, the Geffrye also holds a collection of paintings, prints, and a library all relating to the representation of domestic interiors. Many of these are available online through the Geffrye Images website, a rich database of images relating to all aspects of middle-class homes and gardens. The view of a drawing room at 59 Seymour Street made by Matilda Sharpe c. 1850 is just one of hundreds of images that may be analyzed to understand how the occupants of private houses may have thought about their possessions and what they may have hoped to accomplish through their display.

Previous: A Look Back and Ahead: Reflections on Display, Collecting and Social Class

Next: The Whiteladies House: Interwar ambitions for modern art in the modern home