Velvet Paintings: The Perfect Art for the 18th-Century Home? 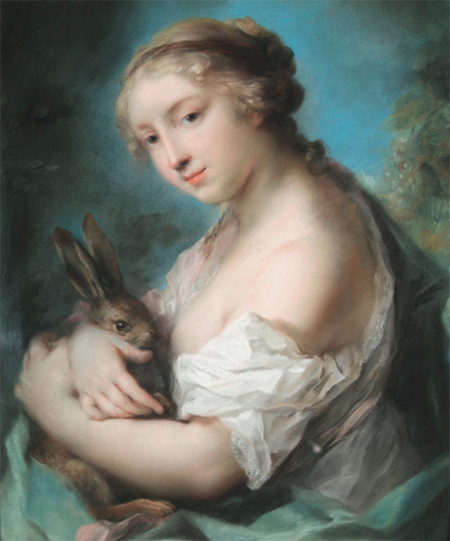 Today’s post is written by one of the founders of Home Subjects, Melinda McCurdy. She is Associate Curator of British Art at The Huntington Library, Art Collections and Gardens in San Marino, CA, and is the curator of the exhibition Velvet Paintings, which will be on view at The Huntington until September 7, 2015.

“The art of pastel painting reached its greatest height in 18th-century Europe. Praised for its bright white luminosity and velvety surface and constrained in size by its delicacy and the technical limitations of its materials, pastel possessed a decorative quality that suited the smaller-scale rooms of rococo interiors.”

This is how I described pastels for the exhibition Velvet Paintings that recently opened at The Huntington in San Marino, CA. It is a statement derived directly from the literature – as English pastellist Francis Cotes (1726-1770) declared in his “Notes on Crayon Painting,” pastels are “superlatively beautiful, and decorative in a very high degree in apartments that are not too large.” Not being a specialist in the medium or even in the art of the earlier eighteenth century, I took this statement at face value: of course pastels were the kind of picture best suited to display in the private interior. It’s only been since the exhibition opened that I began to ask myself why. Is it really a question of scale? What makes a pastel more “decorative” than a small oil painting? Of course, the luminosity achieved through the medium’s ability to diffuse light is lovely. But I imagine a freshly-varnished painting in oils would be equally as sparkling. Inventories suggest that pastel was a favored medium for the most intimate spaces in private houses: drawing rooms, dressing rooms, bedrooms, “cabinets,” and “closets.” Robert Walpole hung pastel portraits of his three sons by Rosalba Carriera in his “Yellow Drawing Room,” while George III’s bedchamber included Rosalba’s renderings of Winter and Spring. Clearly, it is not simply a matter of subject either – while pastel was widely used for portraits, some of Rosalba’s most popular works were allegories. Indeed, William Hoare spent a considerable part of his career making and selling copies of Rosalba’s allegorical compositions to his English patrons. 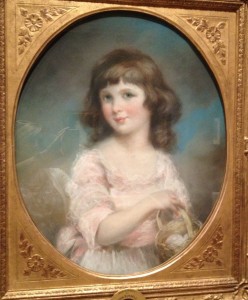 Is it truly the decorative quality of pastels we are talking about when we speak of their suitability to the domestic interior? I would suggest instead that it is a quality intrinsic to the nature of the medium that makes pastel perfect for the home, and in particular the most private spaces of the home. The second half of Cotes’ quote hints at this: “for having their surface dry, they partake in appearance of the effect of Fresco, and by candle light are luminous and beautiful beyond all other pictures.” What he’s getting at is the marked difference between pastel and oil paintings in both their material nature and in the modes of viewing which were seen as essential to appreciating the essence of the pastel medium. John Russell, a successful pastellist, wrote in his Elements of Painting with Crayons (second edition, 1777) that the true beauty of a “crayon picture” is in the way one color shows itself through, or between, another. His treatise explains exactly how to achieve this effect – compounding blue and yellow instead of using green, or carmine and blue instead of purple. In other words, the particular method of making pastel creates a picture in which multiple colors are not blended by the artist into one shade but rather are left visible to the eye. 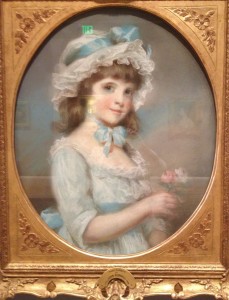 Historians of 18th-century British art will recognize this technique as one of the hallmarks of oil painter Thomas Gainsborough’s work. Gainsborough’s famously jumbled colors were intended, when seen at a proper distance, to coalesce into a luminous whole. Ann Bermingham has made the connection between Gainsborough’s lively brushwork and the science of optics, as it was understood in the 18th century. This posited that visual stimuli (such as color and light) could imprint themselves on the eye and the imagination, linking vision with touch. Gainsborough’s method of painting invited his viewers to participate in the image-making process through optical fusion of the varied tints and broken brushwork, following Locke’s theory that one’s own experiences of the world helped to fill gaps in the visual information. Vision is active, rather than passive. The active viewing of art could provide a certain amount of pleasure, and it was, quite literally, touching.

The difference between Gainsborough’s exhibition pictures and most pastels is the venue in which they were seen. Gainsborough’s pictures were typically destined for display to the crowds at the Royal Academy before being removed into private houses (at least until he stopped showing his work there). The majority of pastel pictures were never seen in such a public context. They were instead hung in spaces that offered a much smaller range of distance for viewing than the walls of the Royal Academy, or even a stately drawing room. Currently on display in the Huntington exhibition are John Russell’s portraits of sisters Anne and Mary Garnett (1789), illustrated here. (They have not yet been photographed in color, so please excuse the snapshots taken with my phone in the gallery.)

These portraits were not intended for public display, and their private nature allowed for an economy of handling different from that typically displayed in Russell’s exhibition work. For example, only the lightest of touches are used to create the ruffles of the girls’ gowns. As Russell wrote, the drapery is made with “freedom, executing as much with the crayon and as little with the finger as possible.” The contrast between the carefully smoothed and blended pastel in the sitters’ faces and the looseness of the bodies is intentional, allowing the viewer to appreciate two distinctive techniques in one portrait.

The smaller scale of the domestic interior encouraged viewers to get close to pastels, to distinguish between their abstract and refined passages in a way that was impossible to do with oil paintings like those by Gainsborough, which required actual distance; it encouraged them to take pleasure in noticing the variety of unblended colors as their vision touched their imaginations, and perhaps even their hearts. Touch is intrinsic to pastel; making the image requires the artist’s caress. Russell himself speaks of pastel in sensory terms, contrasting its warmth to the coldness of oil painting. And while he intends this in the visual sense, if we accept the 18th-century notion that vision is touch, could the velvety quality of the pastel medium be the material correspondent to the actual physical-visual experience its powdery nature engendered, effectively recreating the warm and intimate pleasures of one’s domestic sphere? Maybe this is why pastels were the perfect kind of art for the 18th-century home. If you are a specialist in this field, please send me your comments as I am just beginning to think about these issues and their merits as a potential research project.