Reflections on teaching Art and the Modern Interior 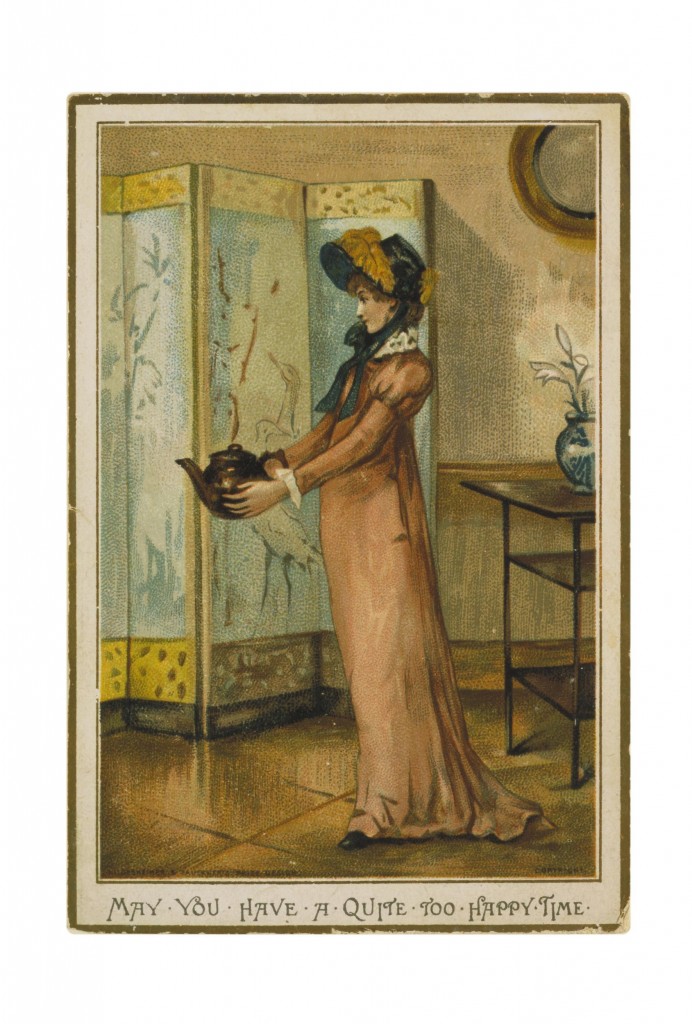 Albert Ludovici II, May you have a Quite Too Happy Time, satirical Christmas card, 1881. Color lithograph on card. © Victoria and Albert Museum, London

Today we celebrate the end of the academic year with a post by Imogen Hart, Adjunct Assistant Professor in the Department of History of Art at the University of California, Berkeley.  Hart reflects on some of the methodological issues raised when teaching about the “interior” and the objects it comprises.  –ANR

This spring I am teaching a new History of Art undergraduate seminar entitled Art and the Modern Interior at the University of California, Berkeley. Here I present some reflections on the experience of teaching this course and its intersections with the interests of Home Subjects. It seemed important that this post, a pedagogical reflection, should be collaborative rather than simply presenting my own point of view as the teacher. Consequently, I invited my students to participate, and I incorporate below contributions from the five who responded: Mathilde Andrews, Sarah E. Boey, Tulasi Johnson, Christine Liu, and Jason Varner. The post is structured around four key questions that have been particularly pressing for our class during the semester.

Where is the art? 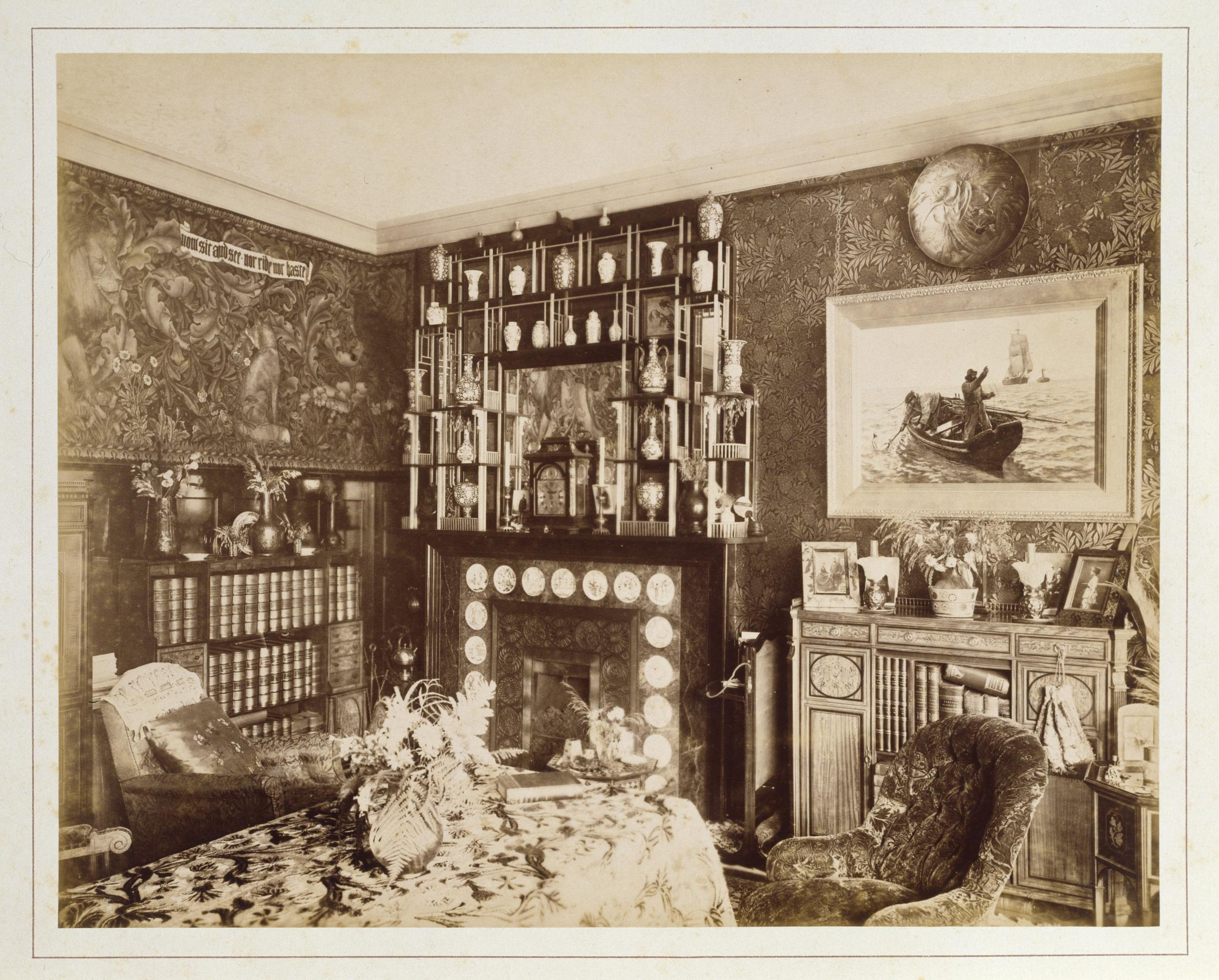 The “and” in Art and the Modern Interior is deliberately flexible. We have studied, among other things, paintings and sculptures displayed in domestic spaces; domestic interiors represented in paintings; “artistic” interiors associated with movements such as Aestheticism, Arts and Crafts, and Art Nouveau; and architect-designed Modernist interiors. The way in which the objective of Home Subjects is framed—the study of the display of art in the domestic interior—may seem to imply that the two things (art and the interior) are separate. Art (one thing) is displayed in the interior (another thing). Yet as Morna O’Neill pointed out in an early post on this blog, the Home Subjects remit includes not only the fine but also the decorative arts and the relationship between the two. Thus “art”—both for our class and for this blog—potentially becomes borderless. Instead of locating art in a self-contained painting, sculpture, or objet d’art, displayed within a distinct interior, the interior itself may be the work of art. 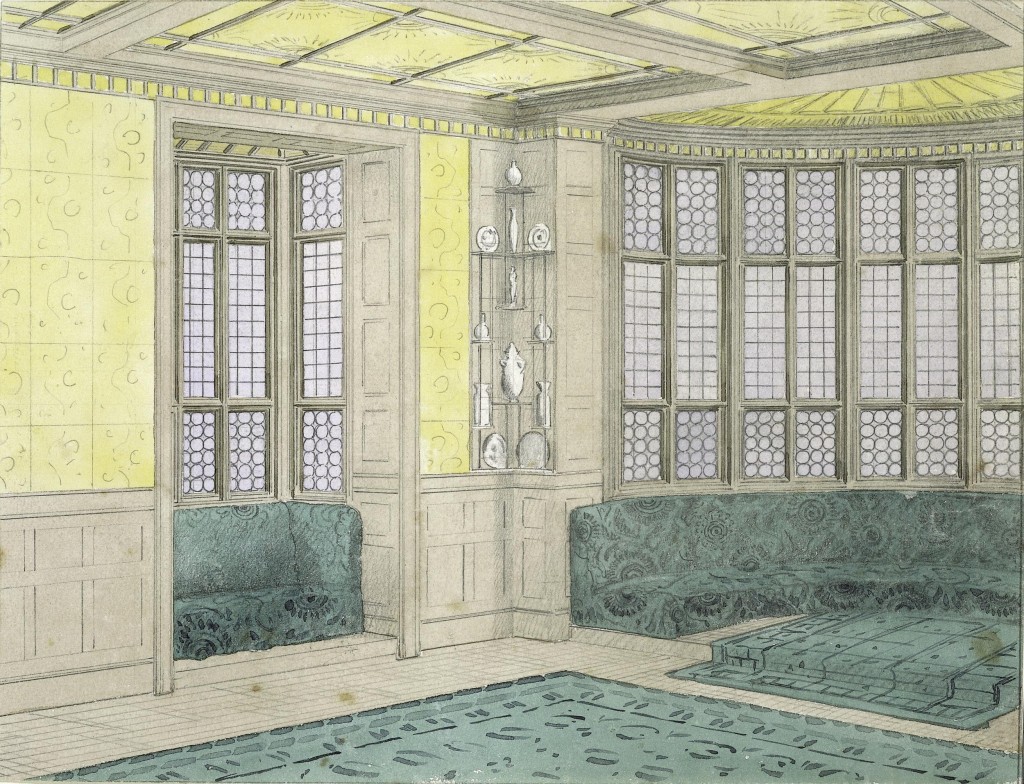 What is the object of study?

This borderlessness can make the study of the interior unwieldy. “The interior” is, as Tulasi Johnson notes, a subject that “resists confinement.” What are we studying? The few historical interiors that have been preserved and remain—in more or less unaltered states—to be visited as house museums? Visual representations of no longer extant interiors, including photographs and prints and drawings? Textual accounts of interiors which provide clues to the appearance of the rooms people lived in or visited? As Christine Liu observes, “Studying Art and the Modern Interior also highlights the difficulty of evidence and source material.” While a painting historian can point to a painting as the undisputed object of study, the interior historian has to consider all these different forms of evidence. It can thus feel rather disorientating to study the interior, as there is often no concrete object that one can keep coming back to. The historical interior looms as a spectral presence that can never be resurrected, whatever archaeological efforts may be made to conserve or reconstruct it. This leaves the historian with a conundrum. Sarah E. Boey notes that even if we acknowledge that there is no substitute for the embodied experience of the interior space, “as art history students studying so many interiors across time and space the only way we can access most of these spaces is through photographs and drawings.” Even if we could travel back in time and enter a given interior, our experience would be influenced by the time of day, the season, the other people in the space, and countless other constantly changing factors that keep the interior perpetually in flux. As Jason Varner notes, “the interior is temporary” and “the concept of the ever changing and used home then beckons the question of how to study the interior.” In addition to the elusiveness of the interior, there are competing ideas about the purpose of studying the interior. The goal might be to trace the development of styles through surviving evidence of historical interiors. In doing so we must be cautious how we interpret representations of the “ideal” interior, “for my house,” Sarah E. Boey observes, “ is certainly not like an Ikea advertisement! But a hundred years from now that may be all that is left of the interiors of our time.” Another goal might be to understand better the function of a given object by situating it in a specific interior setting. Alternatively, we might seek to reveal how the contents, spaces, and surfaces of the interior can influence its inhabitants; as Christine Liu puts it, “The interior itself sets up modes of behavior and expectations of taste.” Another common goal is to understand a historical figure’s biography by examining her or his domestic interior. This question of biography and the related topic of “identity” has been the most challenging, and stimulating, of the approaches we’ve encountered. 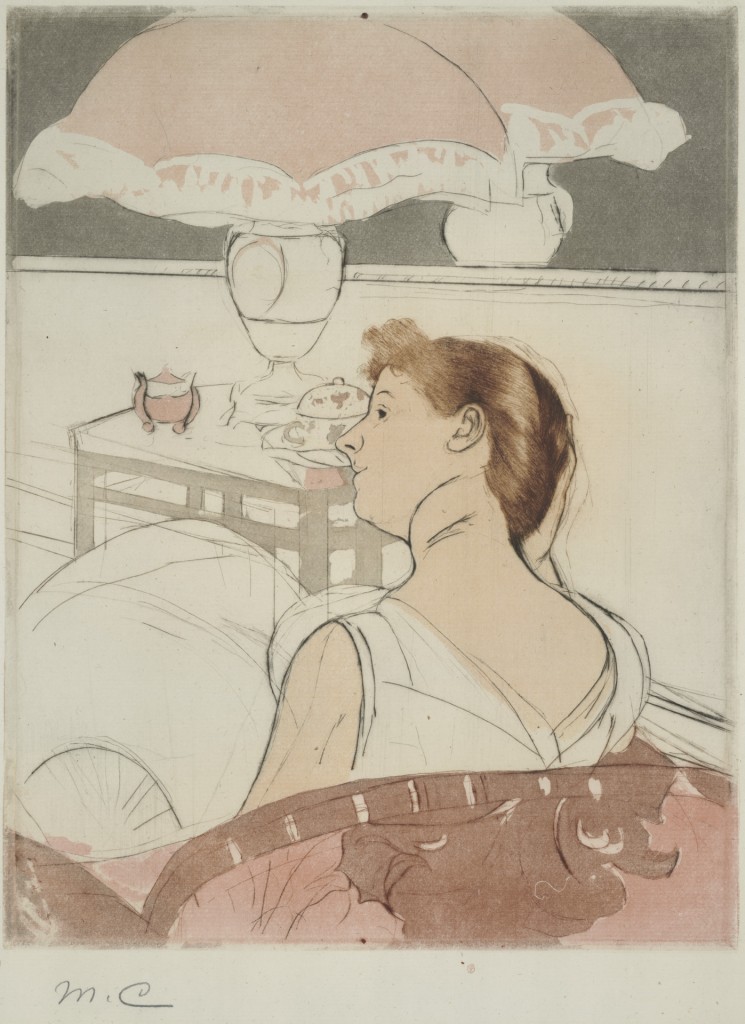 With whose biography or identity do we associate the interior? Is it the architect’s interior? The artist’s? The inhabitant’s—and, if there is more than one, which inhabitant’s? The relationship between the interior and “identity” has been the subject of considerable debate in our class. Jason Varner describes this “concept of gleaning identity” as the “most complicated” issue we’ve encountered. In many of the readings we’ve discussed in class biography and visual evidence are employed to shed light on one another; we are invited to read the space differently based on the biographical insights, and to understand the biography better through the visual clues that survive. As Tulasi Johnson points out, the interior can be understood to “confine the body or, conversely, expand the body’s borders.” Similarly, the interior may shape identity or it may function as an extension of the self, a means of expressing and constructing identity. One reason why this repeated insistence on the biographical is so challenging is that it can make the researcher very self-conscious. The process of understanding how an interior might relate to identity often requires us to ask ourselves questions such as: How would living in this interior direct or modify my behavior? Which aspects of my identity would it enable me to express? We may also resist linking the interior closely to identity because of anxiety that our own identities may be inadvertently exposed in our domestic interiors. Tulasi Johnson observes, “It is also so much harder to resist subjectivity when learning about the modern interior. I have found my critical distance clouded, especially when learning about identity and the interior.” Another reason why identity and the interior is such a provocative subject is that such scholarship often aims to deconstruct restrictive canons—those that may be masculine-biased or heteronormative, for example. Its potential to illuminate the lives of those whose stories are not told by mainstream histories of modernism makes the study of the interior a field that bears considerable responsibility. In Tulasi Johnson’s words: “it feels like the stakes are high in getting to the bottom of it all!”

What do art historians do with the interior?

Studying the history of the interior is a multidisciplinary endeavor. As Mathilde Andrews puts it, the interior “operates as a philosophy, a work of art, and a physical object in space” and its study requires us not only to integrate “philosophies, art historical methods, and social history” but also to learn “a new way of thinking.” My own discipline, and that of the department in which I teach, is art history. Most of the students taking the class are art history majors, and the rest are art history minors. Many of them have observed that studying the interior is very different from studying other kinds of art, but that studying the interior has also changed the way that they think about their other art-historical studies. How different, really, is the interior from other subjects of art history? Could it be that studying the interior can in fact be illuminating for other art-historical endeavors? As Christine Liu astutely suggests, “The process of studying (or reading about) a painting through evidence of past sketches or studies is a process akin to revisiting an interior through the traces left [behind].” We can pursue this analogy. When we interpret a painting through its extant studies, the result is that the object of study is not really the single, final, painting, but rather the combination of all the studies and versions together—this is a multifaceted “object” that the scholar creates from the evidence available to her. We accept that we do not know how many studies and other versions may have been lost or destroyed. We accept that leaping from the differences between the versions to conclusions about the artist’s intentions, or the way the painting might originally have looked, is a speculative endeavor. We are attempting, with limited evidence, to step back in time, and see the work in progress, and watch the artist making decisions. In this respect, this practice is analogous to the study of the interior. We accept that we have limited evidence and that each piece of evidence is further limited to a single moment in time. We accept that many of our conclusions may be speculative. With these caveats in mind, we are trying to travel back in time and watch the interior come into being, see it in use, watch it accumulate and shed objects and decorations and inhabitants. But we can also acknowledge that even if the pursuit of some kind of objectively real historical interior is ultimately futile, we can nevertheless explore what the idea of the domestic interior has meant for different people at different moments, and consider how visual representations of the interior have functioned to construct and reflect that shifting idea. In conclusion, I hope that the questions we have raised about the boundaries of art, types of evidence, biography, and the methodologies of studying the interior will be of interest to the readers of Home Subjects.
Acknowledgements

Thanks to all the students currently enrolled in my seminar Art and the Modern Interior for their contributions to class discussions throughout the semester. Thanks especially to Mathilde Andrews, Sarah E. Boey, Tulasi Johnson, Christine Liu, and Jason Varner, for sharing their reflections. I am also grateful to the History of Art Department at the University of California, Berkeley, and to Bonnie C. Wade, Acting Chair of the Department, for her support of this project.

Previous: The Art Dealer as Decorator

Next: A Bonfire of Regency Vanities: The Wanstead House Sale of 1822