Pictures-within-Pictures and the Gallery as Surrogate Home 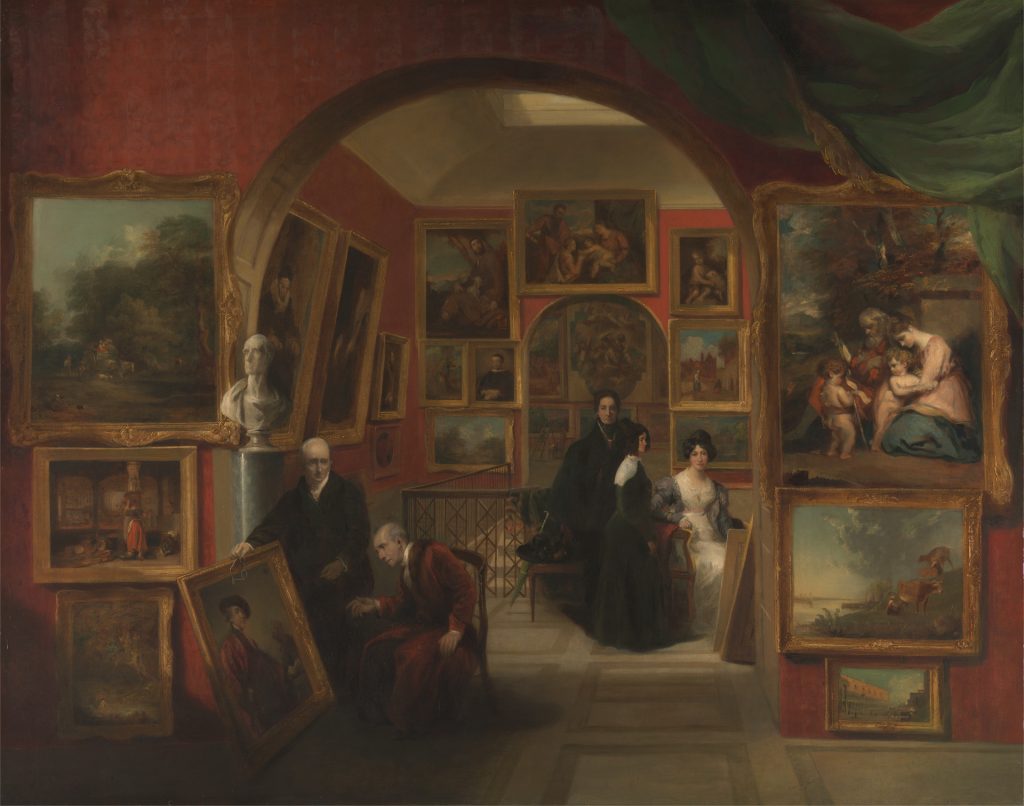 Our contributor today, Catherine Roach is an Assistant Professor of Art History at Virginia Commonwealth University. Her first book, Pictures-within-Pictures in Nineteenth-Century Britain, an Ashgate book published by Routledge, was published in June 2016. She is currently at work on a second book, The British Institution: A History.

To picture the home is to picture paintings, prints, or drawings hanging on the walls—at least, that is the case with most depictions of elite households. And, as Morna O’Neill has pointed out on this site, elite households tend to be the best documented and the most studied. This post considers a different sort of space and a different sort of subject: a gallery that was not part of a home and a collector who had lost his collection. It draws on material from my new book, Pictures-within-Pictures in Nineteenth-Century Britain, which argues that repainting the work of another into one’s own canvas is a deliberate and often highly fraught act of reuse. Artists working in nineteenth-century London were in a peculiar position: based in an imperial metropole, yet undervalued by their competitors in continental Europe. Many claimed that Britain had yet to produce a viable national school of art. Using pictures-within-pictures, British painters challenged these claims and asserted their role in an ongoing visual tradition.

As Chapter 1 of Pictures-within-Pictures explores in more detail, John Scarlett Davis’s Interior of the British Institution represents the gallery of a philanthropic arts organization during an exhibition of historic art held in 1829. The gallery is not a domicile, yet its contents were domestic furnishings, lent by their owners for the purposes of a public exhibition. The figures in Davis’s paintings seem to have made themselves very much at home; they have taken off their outerwear and found seats, and the group the left foreground has even removed a painting from the walls for closer perusal. The artists Benjamin West and James Northcote appear beneath a portrait bust, conversing about the framed canvas before them. This episode is however, pure fiction, as is the case with much of Davis’s painting. (For more on Davis’s artistic liberties, see my article forthcoming in British Art Studies, “Rehanging Reynolds at the British Institution: Methods for Reconstructing Ephemeral Displays.”) The portrait the artists are studying, Sir Joshua Reynolds’s Self-Portrait as a Doctor of Laws, was not exhibited at the Institution in 1829. But Davis included it anyway, as part of an elaborate visual argument for the close relationship between the British school of art (as represented by Reynolds) and the art of the continent (as represented by many of the surrounding works). 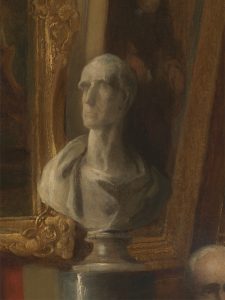 Until recently, we did not know the identity of the man in the portrait bust prominently located at the apex of this group. Research for Pictures-within-Pictures revealed that it is Edward Hodges Baily’s bust of Richard Hart Davis (no relation to the painter). Hart Davis had been an important patron of art, and this group might therefore celebrate the role of both artists and patrons in promoting the reputation of the British school. But when this painting was created, Hart Davis had a home, but not an art collection to fill it. A Bristol merchant and politician, Hart Davis made a splash in London artistic circles in the early 1810s. He paid huge prices for works by continental Old Masters and contemporary British artists, some of which he bought sight unseen. He also became an Hereditary Member of the British Institution. In 1819, however, he was forced to declare bankruptcy and dispose of his collection, which included major works by Claude, Rubens, Parmigianino, and West. After this setback, he seems to have continued to patronize the arts, albeit on a more modest scale. He owned several family portraits, including Sir Thomas Lawrence’s portrait of his daughter, Louisa Harford, which John Scarlett Davis used as the source for the image of the seated woman in white in his painting of the British Institution.

The identification of this bust suggests that Richard Hart Davis may also have been the original owner of John Scarlett Davis’s picture. Its prominent placement also suggests the crucial role of patronage in the development of a national visual tradition. At the same time, however, it elides the loss of Hart Davis’s personal art collection by showing him and his family members as patrons of a collectively-sponsored, public art gallery. In this image, the gallery acts as a surrogate home. The contents of the Institution’s temporary exhibition stand in for a lost domestic collection. That an image of a gallery could function in this way reminds us of Anne Nellis Richter’s important argument, conveyed on this site and elsewhere, that many nineteenth-century display venues “imposed no clear boundary between public and private space.” It also reveals one reason that the British Institution flourished for over sixty years: it provided opportunities for citizens of modest or newly constrained means to participate in the patronage of art. The British Institution will be the topic of my next book. In the meantime, I hope you will check out Pictures-within-Pictures in Nineteenth-Century Britain for more on John Scarlett Davis and many other nineteenth-century artists whose repainted paintings constitute visual interventions in ongoing artistic debates.

Previous: Trafalgar Day and a National Hero “at home”

Next: Home (Subjects) for the Holidays: Queen Victoria’s Christmas