Dining Room at Highclere Castle, as it appears in an episode of the TV series, Downton Abbey.

Last winter, Home Subjects had the opportunity to visit Downton Abbey: The Exhibition in Palm Beach, Florida. Today the exhibition opens at Biltmore in Asheville, North Carolina, where it will be on view until April 2020. With the film opening recently in theatres, Downton Abbey nostalgia seems to be all around us, so it’s an appropriate time to revisit the TV show and consider how it used the display of art in the domestic interior to develop its setting. The exhibition’s branding invites visitors to “experience the history–the fashion–the house.”  Certainly, there have been few works of popular culture in the past 25 years that have done more to cement the notion of the English country house interior in the minds of the general public–only the BBC’s 1995 Pride and Prejudice makes it under the wire as a contender–but of course as readers of this blog will already realize, that idea can be as misleading as it is compelling, and the exhibition does not attempt to correct these misapprehensions.

In many ways, Biltmore makes the perfect venue for this exhibition. The Downton Abbey exhibition consists of props, sets, and costumes from the TV series, staged to emphasize social history and the research into period customs and objects that underpinned the series’ design. In Palm Beach, the venue hosting the exhibition was a multi-purpose arts space whose architecture did little to enhance the mood the exhibition’s designers hoped to conjure. By contrast, the history of Biltmore itself would seem to run in parallel to that of Highclere Castle, the real-life country house that stood in for the fictional Downton Abbey in the series. 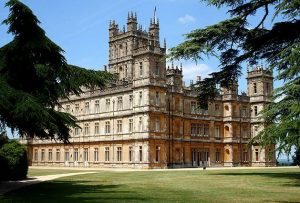 Exterior view of Highclere Castle, which stands in for the fictional Downton Abbey in the eponymous TV series.

Highclere Castle was substantially renovated in the mid-nineteenth century when the 3rd Earl of Carnarvon hired architect Sir Charles Barry to refashion the house in an intentionally historicizing style, a hybrid of Elizabethan and Jacobean influences. Biltmore was built between 1889-1895 for George Vanderbilt II, again in a style that deliberately evoked another time and place, in this case, French chateaux of the Renaissance (though one important influence was Waddesdon Manor in Buckinghamshire, built only a few years before for Baron Ferdinand de Rothschild). In the series, the name chosen for the house, “Downton Abbey,” appears to have been calculated to suggest an estate dating primarily not to the nineteenth century but to the early sixteenth; the implication that the house was originally an “abbey,” a dwelling for religious folk, implies an origin story dating back to the Dissolution of the Monasteries, a period during the reign of Henry VIII when buildings owned by the church in England were appropriated by the monarch and, in some cases, gifted or sold to families to establish their own aristocratic lineages. 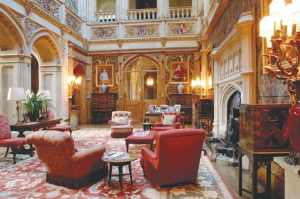 In the series, the real interiors of the state rooms at Highclere were used for filming scenes involving the fictional Crawley family. (Lady Mary’s bedroom, and most of the ‘downstairs’ scenes, were filmed on sets that are included in the exhibition.) Highclere’s interiors appear to have been modified for this purpose mainly to avoid only obvious anachronisms. For example, a view of the Saloon at Highclere from the house’s official website indicates that portraits of Lord and Lady Carnarvon from the latter part of the 20th century are prominently displayed; a view of the room as staged for the series reveals these pictures to be absent. 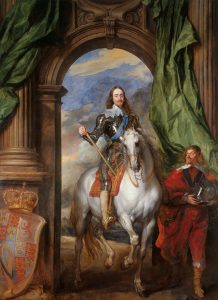 Artworks hanging on the walls of Highclere Castle are visible– sometimes ostentatiously so–in the background of scenes taking place in settings like the Dining Room and Staircase. The series’ script rarely makes explicit mention of any of these works of art. Yet there can be no doubt that the choice to frame scenes with pictures like Anthony Van Dyck’s Charles I with M. de St Antoine (1635 version), which looms conspicuously over the Crawley family during their many breakfast conversations, serves to imply their long lineage. Historically, a portrait as important as this one, in terms of both its social significance and artistic value, would not have been displayed in a room where only intimate dining en famille took place, but rather in a prominent location where important visitors were welcomed. In the context of Downton Abbey’s early 20th century setting, however, the picture’s fluttering drapery and enormous coat-of-arms signify the fictional Crawley family’s storied lineage, royal connections, and (former) extraordinary wealth to even the series’ least art historically savvy viewers. 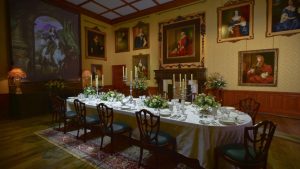 Recreation of the Dining Room at “Downton Abbey”/Highclere Castle featuring digital projection of Van Dyck’s Charles I with M. de St Antoine. Courtesy of the Downton Abbey: The Exhibition website.

As a side note, Highclere Castle’s website claims only that this picture is by Van Dyck, but in a 2014 blog post art historian Bendor Grosvenor noted that Sir Oliver Millar had identified this picture as a copy in his catalogue of Van Dyck’s English period, published in 1984. The original version of the portrait made in 1633 is in the Royal Collection Trust. The Downton Abbey exhibition glosses over any discussion of the painting, its authorship or provenance, or its function as a cornerstone of the interior’s appearance; in a recreation of the Dining Room set featured in the exhibition, a digital projection of the painting stands in for Van Dyck’s work. The purpose of this room in the exhibition is not to highlight the collection of paintings that adorn the room’s walls, or to explain why art was displayed in this way, but to act as a backdrop for the lavishly set dining table. 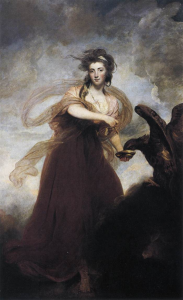 The other picture that makes a frequent appearance in the series is Sir Joshua Reynolds’ Mrs Musters as Hebe (1782), a picture that in real life lives at Kenwood House, London, where it forms part of the Iveagh Bequest, given to the British nation in 1927. (Mrs Musters’ husband, John, was also painted by Reynolds; That portrait is now in the collection of the National Gallery in Washington, D.C.) The fictional Crawleys pass it frequently; Lady Mary poses in front of the portrait of Mrs Musters on her wedding day. It is implied that Mrs Musters is a beloved ancestor, but the woman it depicts was no relation to the Earls of Carnarvon who own Highclere Castle—instead, we should perhaps interpret the presence of this portrait on the stairs as a sign of the tendency of such grand-style portraits to be collected by wealthy and ambitious families (particularly American ones) during the late nineteenth and early twentieth centuries. This does of course touch on a significant detail of the series’ fictional universe, the fact that Downton Abbey had only been maintained for family use into the early 20th century by the windfall provided by Lord Grantham’s marriage to Cora, an American heiress from Cincinnati.

As I noted at the beginning of this post, Downton Abbey: The Exhibition invites visitors to “experience the history–the fashion–the house.” While the exhibition does deliver on the first of these two categories, the third is an afterthought. Interestingly, while the TV series used the house as the central animating force putting people and plotlines into motion, in the exhibition the house functions as a backdrop. Where the exhibition excels is in the stunning array of wardrobe pieces used in the series; some of these are original period clothes sourced and altered for wear by the actors in the series. Yet the exhibition does not discuss the building’s architecture, furnishing, or decoration in any meaningful way, and none of the issues mentioned in this post are addressed. In the exhibition, as in the series and film, the house and its artwork are used mainly as a silent comment on the characters and action.