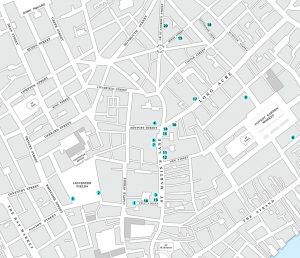 In a brief but suggestive article published in 1966, the historian Mark Girouard noted the existence of “two worlds” – those of fine art and craft practices – in London’s St. Martin’s Lane in the eighteenth century. Indeed, it is well known that the area surrounding Covent Garden had been a mecca for ambitious painters since the middle of the 17th Century, and the St. Martin’s Lane Academy (1), re-opened in 1735 by William Hogarth (2), was the center of artistic training and community for two generations of British painters, sculptors, and architects.

The artistic spaces of the eighteenth-century London art world were also residential, domestic spaces, since artists – along with their families, apprentices, assistants, and servants – tended to live in the same building as their studios, workshops, and retail space. This was true for artists in and around St. Martin’s Lane including Joshua Reynolds, whose first London address was about one mile away from the Academy, where he was an apprentice in Thomas Hudson’s portrait studio in Lincoln’s Inn Fields. Reynolds notably left that apprenticeship before his seven-year term had expired, alternately returning to his native Plymouth and taking residence in a building just around the corner from the Academy in St. Martin’s Lane (3), setting off for Italy, and then returning to St. Martin’s Lane before moving around the corner to Newport Street (4), and then finally taking up residence in the grand townhouse for which his studio was famous in Leicester Square (5) in 1760. In 1754 the architect James Paine rebuilt a house in St. Martin’s Lane and rented rooms in it to the book illustrator and engraver Samuel Wale and the architect and writer John Gwynn (6). Paine’s built his house immediately next door to Old Slaughter’s Coffeehouse (7), which has typically been described as the social nexus of the St. Martin’s Lane set, though numerous other coffeehouses, pubs, Freemasons Lodges, and other clubs in the area seem also to have been gathering places.

Principle instructors at the Academy in the 1730s and 40s included the medalist Richard Yeo (8), and the French illustrator Hubert-François Gravelot (9), who ran a drawing academy in his studio at sign of the Mortar and Pestle in James Street, Covent Garden which the St. Martin’s Lane Academy either replaced, or probably, complemented. The goldsmith George Michael Moser also offered private drawing lessons, and also became a principal instructor at the Academy, and he also lived in James Street, possible at the same address as Gravelot, until he moved in 1737 to Craven Buildings off Drury Lane (just to the east of the pictured map area). George Moser’s daughter, the painter Mary Moser, was born and raised in this house. Moser and Hogarth’s colleague at the Academy, the painter Francis Hayman, purchased the lease at No. 8 Craven Buildings, immediately next door to the Mosers in 1743, and lived there perhaps as late as 1760, when he moved to St. Martin’s Lane, working and residing in the house, now No. 104, that Reynolds had previous occupied (3). The sculptor Louis-Francois Roubiliac was likewise closely associated with the St. Martin’s Lane Academy, living from 1738 in Peter’s Court, immediately adjacent to the Academy (10), and in 1741 moving to the studio where he would spend the rest of his career at the building now numbered 63 St. Martin’s Lane (11).

At the same time, St. Martin’s Lane, and the surrounding neighborhoods of Covent Garden and Soho were replete with the shops of cabinetmakers and upholsterers, carvers, goldsmiths, print engravers, as well as painters, sculptors, engravers, and other creative trades. By mid-century the best-known cabinetmakers and wood carvers of the period all lived in St. Martin’s Lane. Thomas Chippendale worked with the engraver Mattias Darly in his lodgings in Northumberland Court at the base of St. Martin’s Lane (just south of the map image), in the shadow of the house of the great art patrons, the Duke and Duchess of Northumberland, until 1754, when Chippendale published The Gentleman and Cabinet Makers Director “from the sign of the Chair,” at what is now 60-62 St. Martin’s Lane (12), making him the immediate next-door neighbor of Roubiliac. The location likely appealed to Chippendale because of the notable concentration of ambitious cabinetmakers who operated in St. Martin’s Lane. John Channon (13), William Hallett (14), William Vile and John Cobb (15), William and John Linnell (16), and Benjamin Goodison (17) all had workshops in or directly around the lane, and we could add the workshops of at least 8 other lesser-known cabinetmakers, also working in or immediately around St. Martin’s Lane by 1754. Famed wood carvers and published designers Mattias Lock (until 1752 at 18) and Thomas Johnson (19), who met while working in cabinetmaker James Whittle’s Great St. Andrew’s Street workshop (20).

Uncovering and visualizing this type of information, the larger task of my ongoing book project on this topic, reveals an astoundingly rich series of networks that formed a remarkable stylistically coherent artistic community, which leads me to posit that the mid-18th Century London art world was more integrated, collaborative, and inclusive of diverse materials and artistic practices than has been yet recognized. It reveals, in effect, not “two-worlds” of fine art and craft practice, as Girouard’s intriguing thesis had it, but one world of overlapping, collaborative and competitive networks of artists, artisans, suppliers, dealers, patrons, and institutions that made up the mid-18th Century London art world.

Next: Downton Abbey: The Exhibition