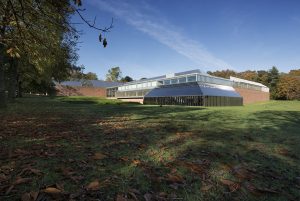 The Glaswegian mercantile collector Sir William Burrell (1861-1958) is best known today for the collection that shares his name. The Burrell Collection, now housed in a purpose-built pavilion in Glasgow’s Pollok Country Park (currently undergoing renovation until Spring 2021), was once housed in 32 different locations across the nation. A catholic collection of over 6,000 objects ranging from Chinese pottery to Persian Carpets, modern-European painting, medieval European stained glass and tapestries, Burrell’s collection did not fit physically or decoratively within the setting of the home. As such, the objects that he chose to display at home give us an insight to both his taste and his ideas on domestic decoration. 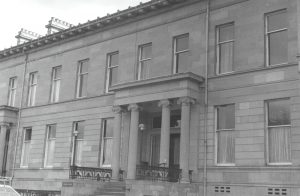 Burrell purchased two homes during his lifetime: the first a neoclassical townhouse at 8 Great Western Terrace in Glasgow’s fashionable West End and the second, Hutton Castle, a fifteenth-century medieval tower with sixteenth-century additions. Although two opposing building types, their interior designs held strong similarities. Indeed, a visit to either would give the impression that this was a collector with a deep admiration for the gothic. Burrell purchased Great Western Terrace in 1901 shortly after his engagement to Constance Mitchell. The house, designed by Alexander “Greek” Thomson (1817-1875), had Greco-Egyptian style interiors, as was consistent with Thomson’s design. This style was in contrast to Burrell’s growing collection, which he had been cultivating since the 1880s. 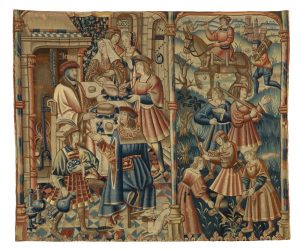 Our knowledge of Burrell’s collection at this time comes from the catalogue of the 1901 Glasgow International Exhibition. Burrell was the single largest lender of art works to the exhibition; loaning a total off 224 objects, only 52 of which were pictures. The remaining 172 objects ranged from tapestries, carpets, brassware, medieval stained glass, mirrors, furniture and glassware. These “domestic” objects were mostly European in origin and were bought by Burrell on trips to the continent. Three such trips were instrumental in informing the collector’s early decorative taste. In September 1898, October 1899 and July 1900 the Edinburgh architect-designer Robert Lorimer (1864-1929) accompanied Burrell and his family to Europe as a professional advisor. Following on from these trips Burrell employed Lorimer to renovate Great Western Terrace’s interiors in a style that paid homage to Northern Europe. Writing to his friend Robin Smith Dods (1868-1920) on the subject of the renovation, Lorimer stated, “I’m going to alter it for him [Burrell], ‘chip away the ginger bread’ as he expresses it, also the plush mantelpieces etc etc rather a nice job […] He wants it very simple as he has such lovely ‘contents’.” 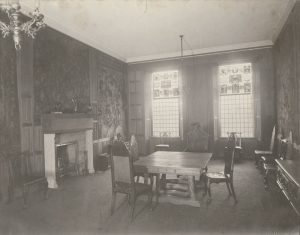 Surviving photographs of 8 Great Western Terrace commissioned by Lorimer after the renovations show a simple Gothic-styled interior. Linenfold oak panelling designed by Lorimer ran through the house, framing Old Master paintings and medieval tapestries. The idea of Burrell collecting purposely for the decoration of his interiors is best seen through the dining room of the house. In a letter to Dods Lorimer wrote, “His [Burrell’s] dining room is now to be tapestry all round. The 3 hunting scenes he had in the Glasgow exhibition just fill one side and he’s going to have a tear round the continent in the spring to try & find some more.” 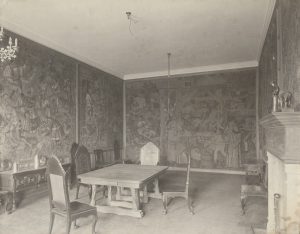 A contemporary photograph shows that Burrell was successful in sourcing more tapestries for the room. To The Months: September, January and April (all c.1500) he added Scenes of Wine-Making: Vintners a Wine-Press (1475), Rural Dalliance and Fruit Picking (1500-25), Stag Hunt (1500) and Lords and Ladies on Horseback (c.1460). A Lorimer-designed Gothic-style table and medieval stained glass panels accompanied the hangings. Burrell also displayed modern European bronze sculpture within the room: Le Marteleur by Constantin Meunier and La Glaneuse by Charles van der Stappen hinted to his interest in collecting modern European art. This practice of pairing bronze sculpture with medieval tapestries was continued throughout the townhouse; on the first floor landing Auguste Rodin’s Fleeting Love was displayed on an oak chest below the fifteenth century Flemish tapestry Charity Overcoming Envy. 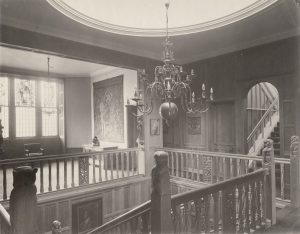 Unfortunately we have no direct way of knowing whether the collector made a distinction between objects for decoration and those that belonged in a museum setting. Burrell did not write about his collection; the only collection-based material that survives in his hand are 28 purchase book that record his acquisitions between 1911 and 1957. However, if we consider Burrell’s interior schemes found at Hutton Castle conclusions can be drawn through the objects he kept within Hutton and those that he did not. 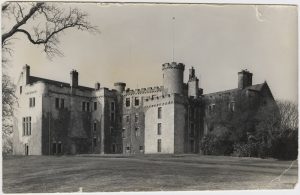 Burrell purchased Hutton Castle in late-1915, at last fulfilling his aspirations to own a medieval castle. Unlike Great Western Terrace, the late-gothic exterior of the castle suited the objects and fittings found within its interior. As with Great Western Terrace, Burrell carefully chose the objects to be housed within his decorative schemes. Those that he did not think were suitable, he would loan to museums or galleries. In February 1935 Burrell wrote to James Bolivar Mason (1879-1945), Director of the Tate Gallery, regarding four bronze sculptures he had at Hutton:

“[…] I should like to send 4 small bronzes to the Museum viz: The Gleaner by van der Stappen, The Blacksmith by Meunier, The man with the broken nose by Rodin – the first bronze Rodin ever did & Joan of Arc listening to the Voices by Bastien Lepage – the only bronze Lepage did. They would take up very little room & we feel they do not go with our Gothic things.”

Burrell’s reference to the bronzes not going with “our Gothic things” illustrates a finessing of his ideas on domestic display between Great Western Terrace and Hutton Castle. In Glasgow Burrell displayed fine art alongside decorative objects. Indeed, his display of fine art pieces was such that he commissioned Lorimer to design a white drawing room for three full-length Whistler portraits that he owned at this time: La Princesse du pays de la porcelaine, La Dame au Brodequin Jaune and The Fur Jacket. In contrast, by 1935 Burrell had a clear vision for his collection at home: one that was to reflect the late-medieval castle within which it was housed and his taste for “gothic things”. 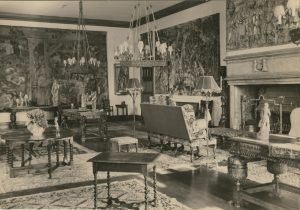 Inventories of the castle, written by Burrell in 1948, show that the contents of the rooms in the castle were largely consistent in their decoration. The main drawing room at Hutton Castle gives an idea of the scheme continued throughout its interior display. It held fine tapestries, examples of late-sixteenth and early-seventeenth century English oak furniture, early-eighteenth century cane and upholstered chairs and settees, medieval sculpture and a large Gothic stone chimneypiece. The oak floors were covered in rich carpets and windows fitted with medieval stained glass.

Burrell’s removal of the bronzes shows the collector making a clear decision about what he wanted to be displayed in his home. His letter to Mason suggests that Burrell recognised the individual appeal of the bronze sculptures to the museum; all four of which were made by celebrated modern European artists. In this manner we do see the collector distinguishing between “fine art” and “decorative” objects. However, in the 1944 memorandum of agreement between Burrell and the Corporation of Glasgow, he stipulated that the collection

“be shewn as it would be if in a private house, eg. the stained glass instead of being shown altogether should be shown in as many specially constructed windows of the building as possible […] so as to insure that the building has as little of the semblance of a Museum as possible.”

What is clear is that Burrell wanted to preserve the schemes that he had created at Hutton. In the memorandum Burrell also specified for rooms from Hutton Castle to be reinterpreted in the museum space: the drawing room, dining room and hall. These “Hutton Rooms” showcased his “gothic things” as he had envisaged them, bringing his decorative display into the public realm of the museum.

Next: Christmas at Osborne House