Home (Subjects) for the Holidays: (Historic) Home for Christmas

Over the past few weeks, we have focused our attention at Home Subjects on the way in which the display of art in the decorative interior intersects at this time of year with Christmas decorations, the history of this tradition, and what it might mean for the ways in which we encounter works of art in the home.  Morna O’Neill and Anne Nellis Richter collaborated on this series.  This is the final post in this series.

The holiday season provides “Home Subjects” with an opportunity to think about the seasonal decoration of art museums, and the way in which this temporary decorative context changes the visitor’s experience of the collection. 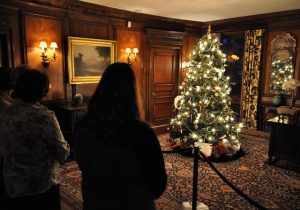 In Winston-Salem, the home of Home Subjects, Reynolda House Museum of American Art decorates for “the holidays at Reynolda.” As they explain, “the historic 1917 home of R.J. and Katharine Reynolds will be decorated with magnolia leaves, nandina berries, and other greenery inspired by the decorations that Katharine Reynolds used for the holidays. Holiday greeting cards from the Museum Archives will be on display and carols will be played on the original Aeolian organ every day.” Reynolda House is specifically associated with one particular family. The house was built in 1917 and occupied by two generations of the family, first becoming an educational institution in 1965. Christmas at Reynolda House can then be located fairly specifically, in the traditions practiced by the Reynolds family during a relatively short historical period. Interestingly, the collection of American art currently on display in the home was begun by Barbara Babcock Milhouse, the grand-daughter of R. J. and Katherine Reynolds. When visitors encounter a Hudson River School landscape hanging adjacent to the Christmas tree, they are–perhaps unwittingly–experiencing a layered approach to the display of art in the domestic interior across generations.  Katherine Reynolds, who exerted a considerable role in the planning of the house and its surrounding grounds, looked to the English Arts and Crafts movement for inspiration, seeking to integrate house, landscape, and community.  Just down the road in Asheville, NC, the grander Biltmore House also decorates for the holidays.  Built by George Washington Vanderbilt II, Biltmore looked to French chateaux rather than English bungalows as an expression of gilded age taste, althought Waddeson Manor was an important point of reference.  Christmas at Biltmore is big business, with the marketing of a “Biltmore Christmas at Biltmore” line of seasonal decorations.  Now we can celebrate like the Vanderbilts in our own home. 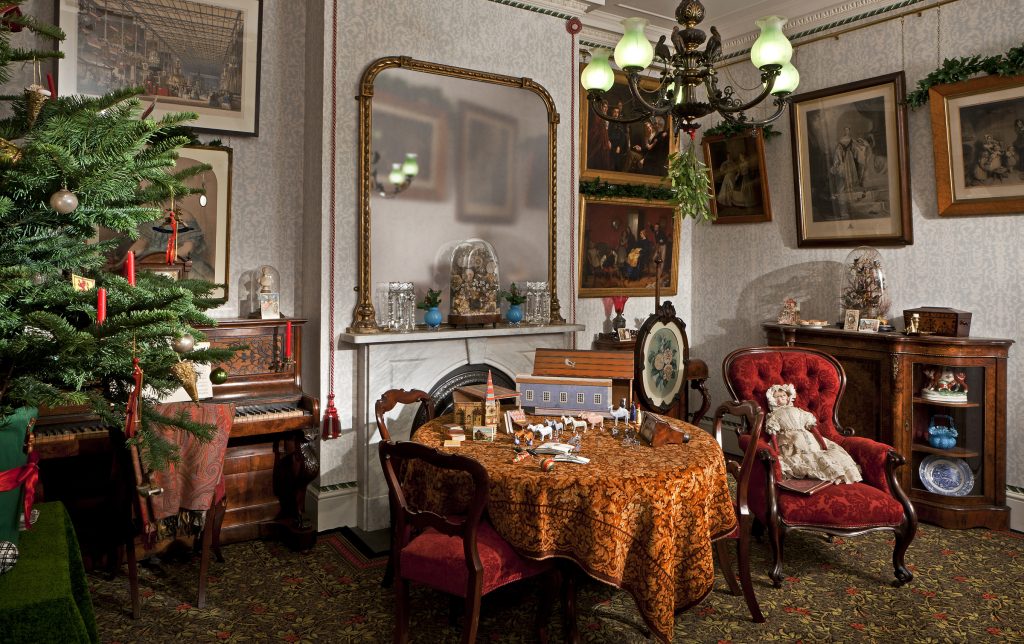 Christmas Past exhibition, Drawing Room in 1870. Photo courtesy of the Geffrye Museum. Christmas decorations assume a recognizable form during the Victorian period.

How might houses that are not affiliated with one specific person or family, or in the case of many historic properties, enjoyed occupation over the course of centuries, seek to decorate for a holiday that only achieved its iconic form in the 20th century? The Geffrye Museum in London recently opened its annual “Christmas Past: 400 Years of Seasonal Traditions in English Homes” display.  As the press release explains, “Each year, authentic festive decorations, lighting, music and greenery transform the Geffrye Museum’s period living rooms, giving visitors an evocative insight into how Christmas has been celebrated from 1600 to the present day.” One of the most striking things about the Geffrye display, at least according to Lauren Davidson writing in the Telegraph, is the realization that Christmas (and its attendant decorative traditions) were a nineteenth century phenomenon. 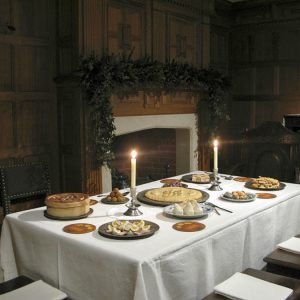 As curator Hannah Fleming explains, “In the 17th century, it was New Year’s Day that was the high point of the festival season. Christmas itself was associated with rowdy behaviour. It was seen as a church-endorsed licence to misbehave in a way you couldn’t get away with the rest of the year.” So, for example, a room representing a middling-class home in the 1630s is decorated only with greenery on the hearth and candles on the table–the focus of the display is the array of sumptuous–and luxurious–sugary sweets. Each room represents a different decade and reflects the decorations appropriate to that period.  Only in the Victorian room, illustrated above, do the decorations assume the form that we now recognize, complete with Christmas tree and mistletoe adorning the chandelier.  For more on this tradition, see an earlier post in our series. 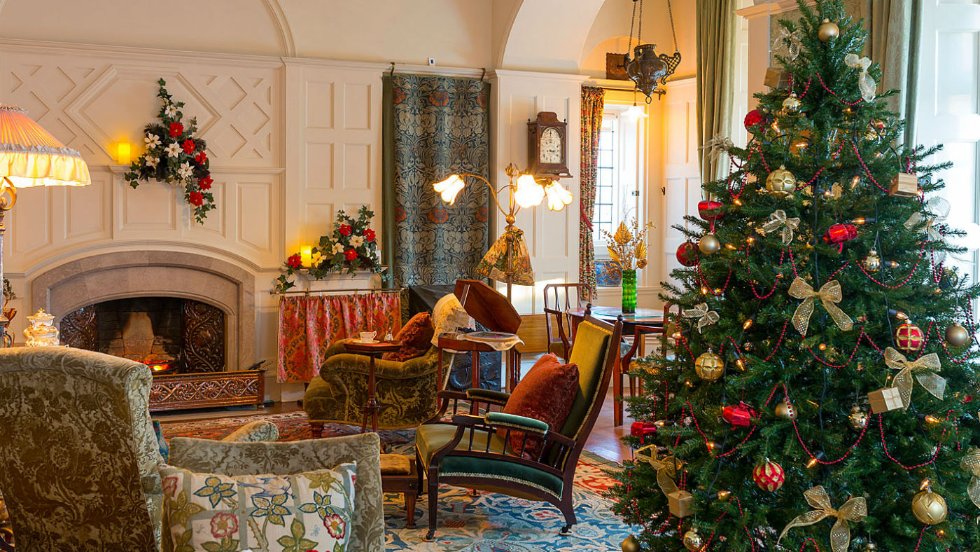 The National Trust is attempting something similar at several of its properties during the festive season. At Standen, visitors are invited to “stroll into the house past the lit fireplace in the hall before entering each room dressed for a different decade in which the family celebrated Christmas at Standen.” Standen is an arts and crafts designed by Philip Webb between 1891 and 1894. It was occupied by several generations of the family who originally built it, the Beales, before passing to the National Trust in 1972. On the National Trust website, House Manager Ben Dale explains some of the process behind the historical displays in the house that stretch from the Victorian period to the present. Dale reveals that his favorite room is the one devoted to the 1960s: “I love the 1960s room – the 1969 Sony Trinitron TV and the Gin and French that the Farm Manager used to enjoy with Helen Beale (that’s a drink made with gin and dry vermouth). Plus there’s the thrill of brightly coloured plastic toys and gifts – it is something very different, but you recognise many of the traditions today too.”

Standen completes the holiday experience by emphasizing the sensory elements of Christmas–they introduce electric fairy lights in the 1920s room, and display a real Christmas dinner in the dining room, whose scents may mingle with those of pine in the air. 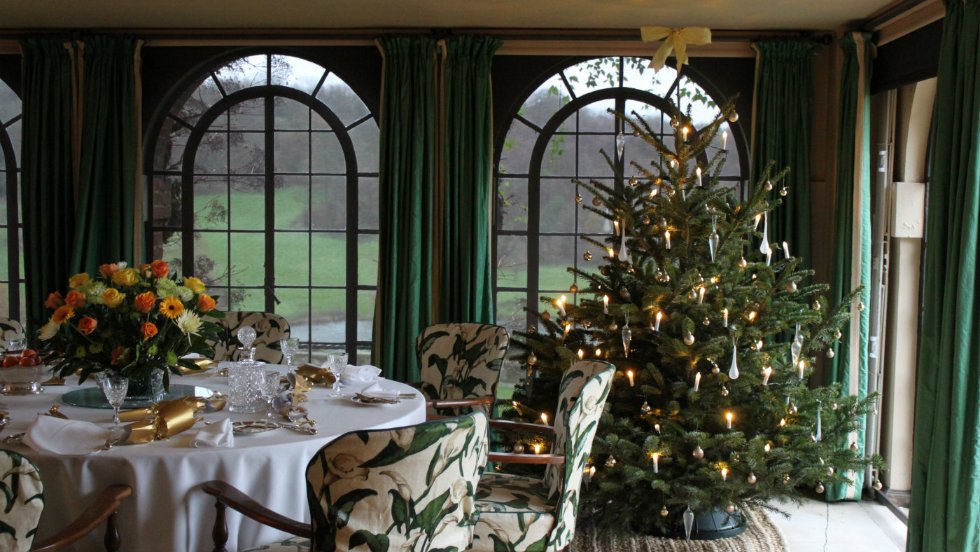 A similar approach governs holiday preparations at Chartwell, the former home of Prime Minister Winston Churchill and his wife. In order to honor this important resident, Chartwell is decorated to celebrate a “Churchill family Christmas” during the 1920s. Again, the National Trust website promises, “A roaring fire will welcome you into the house where the Churchill children celebrated their Christmasses. Charming 1920s style Christmas cards hang across the walls and the Christmas trees twinkle with lights. Traditional garlands adorn the mantlepieces, made with foliage from Chartwell’s very own grounds. It feels as if the Churchill family could be asleep upstairs, just waiting for Christmas morning to arrive.”

The notion that the house can be literally animated by the spirits of past residents through an artful intervention by curatorial staff might be regarded as creating an untenable sense that we could ever “know” the past. However, if judiciously applied, the introduction of well-researched, site-specific installations of holiday décor may provide an opportunity to present historical research in a way that both celebrates the season and educates visitors about the history of “traditions” that are assumed to be more timeless than they actually are. The exhibition at the Geffrye Museum is an excellent example of how to accomplish this.

Previous: Home (Subjects) for the Holidays: Decking the (Museum) Halls

Next: Tastemaker-in-Chief: Reflections on Decoration in the White House