Watercolors in the Parlor 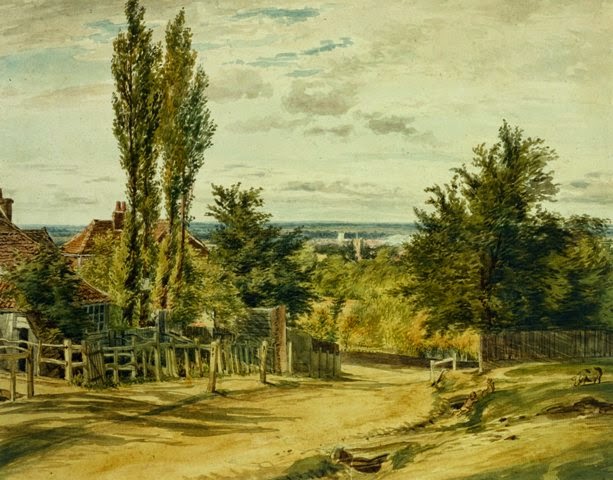 In his notes on an exhibition of the work of watercolor artists Samuel Prout and William Henry Hunt held at the Fine Arts Society in London (1879-80), John Ruskin makes the point that not only are certain kinds of subjects more suitable for display in British homes, but that certain media are better suited to particular types of homes. In particular, he distinguishes between the “great people,” who “always bought Canaletto, not Prout, and Van Huysum, not Hunt,” and those who did purchase and display these “simple” images:

“There was indeed no quality in the bright little water-colours which could look other than pert in ghostly corridors, and petty in halls of state; but they gave an unquestionable tone of liberal-mindedness to a suburban villa, and were the cheerfullest possible decorations for a moderate-sized breakfast-parlour, opening on a nicely-mown lawn. Their liveliness even rose, on occasion, to the charity of beautifying the narrow chambers of those whom business or fixed habit still retained in the obscurity of London itself…”

Much scholarship has focused on the fact that Britain lacked the kind of state patronage enjoyed by artists in the nations of continental Europe, and that the art-buying public of late 18th-century Britain evolved in part out of the rise of the commercial classes. One of the threads weaving through the themes explored by this study group is the notion that British taste is bound by class, in particular a bourgeois one. However, as Ruskin notes, only somewhat patronizingly, the decorators of suburban villas, much like the denizens of grand houses, sought to create an atmosphere of “liberal-mindedness” in their domestic spaces. Questions of “liberality” have teased British art since before the foundation of the Royal Academy, and clearly the concept is still at work as Ruskin seeks to define the function of art within the middle-class home. Does he employ the term as it was used by theorists of the 18th century, as a means of defining a ruling class through its access to wealth and education? Or has the concept itself changed, now that the “moderate-sized breakfast parlour” is the site in which this identity is constructed, and now that an arrangement of “bright little water-colours” can just as easily as a display of great paintings or sculpture serve as its marker?

Next: Walter Crane and Wallpaper Design