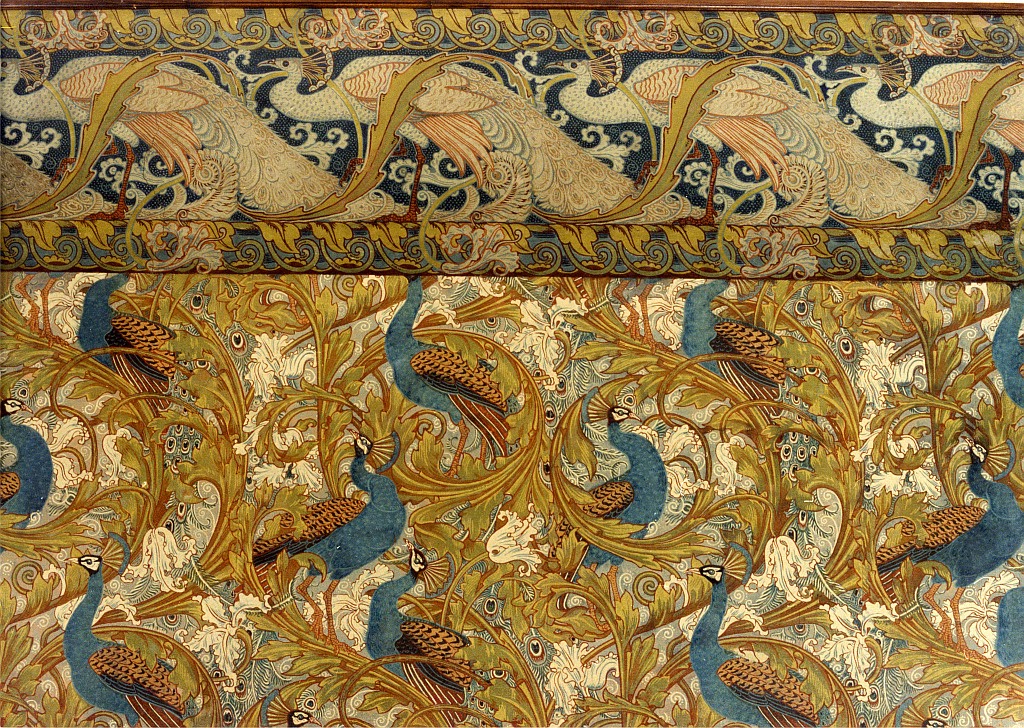 One of the major themes of Home Subjects is the inter-relationship between easel painting and the decoration of the domestic interior for which it was destined. This post will take the case of Walter Crane, the Arts and Crafts artist and designer, to explore this idea in more detail. Crane, who was an experienced painter and engraver, turned to wallpaper design in 1875 when Metford Warner approached him on behalf of Jeffrey & Co., a prominent interior design company. A long and fruitful collaboration resulted, and the process of designing wallpaper challenged Crane to invent new motifs within the often rigid technological strictures of the manufacturing process. Wallpaper design involved the creation of multiple repeating patterns across the surface of the wall, requiring “much ingenuity and invention on the part of the designer,” according to Crane. So much ingenuity, in fact, that in 1894, the critic Aymer Vallance argued that Crane’s design was unsuitable as “mere background” and was, in fact, “complete decoration in itself.”

The design known as Peacock Garden characterizes Crane’s approach to the visual field of the wallpaper pattern, flouting the widespread belief that wallpaper motifs work best when they avoid the direct imitation of nature. In a large repeat, majestic peacocks weave in and out of scrolling acanthus leaves, trailing their colourful tail features behinds them. The accompanying frieze repeated this bird and leaf motif in a horizontal fashion, intertwined with day lilies. When taken together, the papers suggest a room teeming with peacocks, making their way across the top of the room and weaving a path down and across the walls. The design won a gold medal at the Paris Exposition Universelle of 1889. Writing in The Studio five years later, Vallance stated that it was “out of the question to hang pictures on a wall papered with Peacock Garden.”

The vogue for elaborative patterned wallpapers such as Peacock Garden coincided with a renewed understanding of the role of the framed easel painting in interior decor. Writing in the Art Journal in 1901, Audley Mackworth suggested that an easel picture “first and foremost is not decorative” and that when considering the display of easel paintings in the home, decoration must acknowledge that the painting “exists as a thing apart”: “I once heard a painter say that in choosing a wall-paper he wanted to get the nearest approach to nothing for a background.” Had wallpaper, then, supplanted painting as the primary decoration for walls of a home? At least one example of Crane’s Peacock Garden as wall decoration still survives in the entry way to the former private apartment of the director of the Museum of Applied Art (Iparművészeti Múzeum) in Budapest. According to art historian Hilda Horváth, the founding director of the museum Jenő Radisics, an admirer of the English Arts and Crafts movement, installed the paper sometime around 1900, during Crane’s visit to the city and his exhibition at the museum.

For a more in-depth exploration of some of the issues explored above, please see my book: Walter Crane: The Arts and Crafts, Painting, and Politics, 1875-1890 (Yale University Press, 2011).

Previous: Watercolors in the Parlor

Next: An Imperial Palace in Surrey