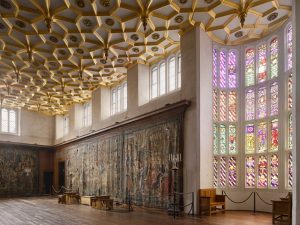 Brussels tapestries depicting the life of Abraham from the Book of Genesis, probably commissioned by Henry VIII and hung in the Great Hall at Hampton Court Palace by 1546.

I’ve begun to take a closer look at the late Victorian tapestry revival, considering it in relationship to royal patronage and national identity.  Tapestry occupied a privileged position in court cultures as the premiere decorative form.  The Royal Collection website even features a “tapestry trail.” In his history of the Royal Windsor Tapestry Manufactory, G. G. Cullingham noted, “politics and weaving have never been far apart.”  Weavings served a practical function as insulation for cold stonewalls, as at Hampton Court Palace, yet they were also portable, ready to be rolled up and transported for outdoor spectacles and the migratory patterns of court life.  For example, tapestries created a backdrop for the procession following the marriage of King Henry VIII to Catherine of Aragon in 1509.  This tradition continued with the Stuart monarchs, when King James I established the Mortlake Tapestry Works in 1619. 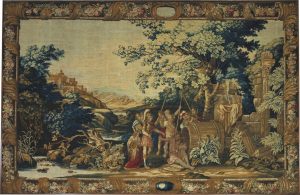 Brussels tapestries depicting the life of Abraham from the Book of Genesis, probably commissioned by Henry VIII and hung in the Great Hall at Hampton Court Palace by 1546.

While the Mortlake Tapestry Works were an important statement of national artistic ambition, they never competed seriously with Flemish and French ventures.  And yet the royal collection continued to acquire foreign tapestries, perhaps most famously and importantly through the collecting of George IV.  The Grand Reception Room at Windsor Castles features a series of Gobelins tapestries telling the story of Jason and Medea from Ovid’s Metamorphosis.  Commissioned by King Louis XV for the throne room at Versailles, the King purchased them, along with thirty-seven other Gobelins tapestries, through an agent in Paris in 1825.  This group also included the cycle telling the story of Queen Esther, hung in the Queen’s Audience Chamber and Procession Chamber at Windsor Castle. 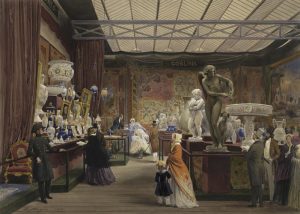 By the mid-nineteenth century, however, the fortunes of tapestry seem to have faded.  The Great Exhibition of 1851 featured a number of examples; including an elaborate display of Gobelins tapestries (abbreviated, perhaps in a Freudian slip, as “Goblins”) in the French Section, as commemorated in this watercolor commissioned by Queen Victoria and Prince Albert.  Yet these products failed to ignite public interest like the textiles on display from India.  With the goal of educating public taste and disseminating knowledge of industry, tapestry seemed too old-fashioned for the Victorian age.  As Dodd’s Curiosities of Industry noted in 1854, tapestry is “tedious to produce,” and “artistically advantageous but commercially very costly to the nation.”  Writing in the aftermath of the Great Exhibition with a particular eye on the intersection of art and industry, the publication averred, “tapestry is associated with the past rather than with modern inventions.”  Crucially, commentators in the burgeoning field of home decoration condemned tapestry as unhygienic, with woven threads “calculated to absorb, instead of repel, infection and the germs of disease.” 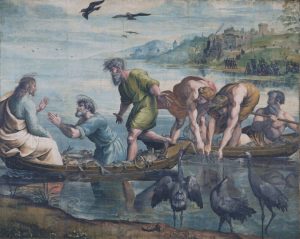 At the very moment when the production of tapestry waned, the idea of tapestry began to play a central role in art theory.  Tapestry was a craft practice with a decorative, narrative, and crucially, figurative lineage. As such, it provided a powerful mode in which to reimagine painting in general and history painting in particular.  In fact, it was not difficult to link history painting and the medium because the Raphael Cartoons (c. 1515, London, V&A), the most important examples of history painting available for study in Britain in the late nineteenth century, were actually executed for tapestries. 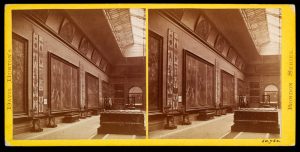 After the death of Prince Albert in 1861, Queen Victoria loaned the cartoons to the South Kensington Museum, where they were installed in 1865. Although the Raphael cartoons were designed by an Italian artist and woven for the Pope in Brussels, they nevertheless presented a powerful appeal to national pride, as Charles I commissioned his own set from Mortlake in 1636.  (The V&A have created a wonderful interactive website about the history of the cartoons and the tapestries, their display, and their recent conservation and re-installation.) 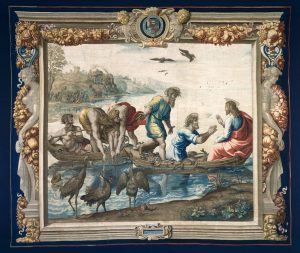 Understood as a historical medium, tapestry was an artistic practice at once decorative and historical, and it could provide a powerful exemplar for painting.  In the late Victorian period, it was thought that tapestry begat to painting. This view gained ground in the second half of the century through the writings of Gottfried Semper, the German-born designer and theorist who played such a vital role in developing and promoting design philosophies in the wake of the Great Exhibition.  In his monumental study Four Elements of Architecture (1851), his Bekleidung or “dressing” theory regarded the textile hanging as the first “wall dressing,” the forebear of the painted canvas. This theory placed tapestry in a direct lineage with painting—indeed, at its origin. The widespread popularity of Semper’s theories provided public justification for large-scale textile projects, such as the Royal School of Art Needlework.  As Lady Marion Alford wrote in her masterful Needlework as Art (1886), part of which was published in Nineteenth Century in 1881, “some writers have regarded [needlework] as a branch of painting. But I cannot endorse this classification. According to Semper, indeed, it is the mother-art of sculpture and painting, instead of being the offspring of either or both.”  Alford here seems to be resisting the popularization of needlework as a way to reproduce paintings, exemplified by Mary Linwood’s “worked pictures” (after well-known paintings) displayed to great acclaim at her gallery in Leicester Square between 1809 and 1845.  For Alford, the primary place of woven pictures gave it the preeminent position among the arts.  In a future blog post, I will discuss how this theory let to the creation of the Royal Windsor Tapestry Works in 1876.

Next: The Evolving House Museum: Perspectives from Margaret Iacono and Esmée Quodbach