CAA 2021 Session: A New Story about British Culture? The Rhetoric of Display

The College Art Association annual conference begins this week in its virtual format, and the Historians of British Art have sponsored a session chaired by Julie Codell that will appear to Home Subjects readers.  We’ll be perusing CAA Abstracts for other relevant papers or sessions, and we’ll also try to post more about upcoming virtual events with a Home Subjects-related appeal.  In the meantime, if you have an event of interest, please let us know at [email protected]

The Metropolitan Museum’s $22 million reorganization of its British galleries and 2020 re-opening of its 11,000 square feet devoted to British decorative arts, design, and sculpture created between 1500 and 1900 evokes a rethinking of British visual culture and its modes of display. Panels may investigate the themes of this reorganization in the Met’s exhibition or in other transforming exhibitions in any institutions in the UK or its colonies from the past until now: (1) the colonial roots of British material culture, (2) the commercialism driving British design, and (3) socio-political hierarchic relations among cultural objects and their producers. In this panel we will examine these topics within the overarching consideration of the rhetoric of display: how display narrates / represents intertwined economic and aesthetic values or the connections among culture, empire, and slavery. 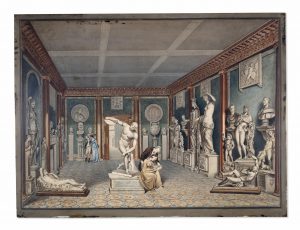 William Chambers, “The sculpture collection of Charles Townley in the dining room of his house in Park Street, Westminster,” 1794. British Museum.

Upon the death of Charles Townley in 1805, the British Museum purchased the collection of Townley Marbles, over 300 Greco-Roman antique sculptures, cineraria and inscriptions, originating mainly from Italy. Their purchase for £20,000 was ﬁnanced by the British government, as well as allocating funds to build a purpose-built gallery for their display, an enormous sum when considered within the context of the growing conﬂict of the Napoleonic Wars. The acquisition of the Townley Marbles was only the second collection of Greco-Roman antiquities acquired by the museum and was the ﬁrst collection to be given its own designated building extension, protruding from the seventeenth-century manor house which housed the founding collection of Sir Hans Sloane. In this paper I will explore the conception, building and display of the Townley Collection in the ﬁrst half of the nineteenth century, examining the display and reception alongside those of the Egyptian and Parthenon Marbles. In doing this, I will show that the display re-contextualized the museum’s growing collection of antiquities in the early nineteenth century, showing a marked shift in the museum’s collecting and display, which in turn established and then reinforced the narratives and underpinning of the universal museum as a colonial and nationalistic institution. 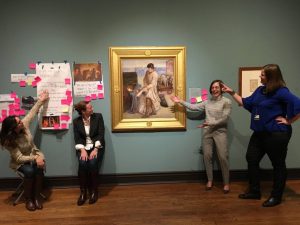 Saralyn Rosenfield, director of learning and engagement; Heather Campbell Coyle, chief curator and curator of American art; Margaretta Frederick, curator of the Bancroft Collection; Amelia Wiggins, manager of gallery learning and interpretation prototyping the Pre-Raphaelite gallery at the Delaware Museum of Art. Photo by Stacey Mann, courtesy of the Delaware Museum of Art.

In this paper I will address the reinterpretation and reinstallation of the Delaware Art Museum’s collection of approximately 200 works of Pre-Raphaelite art. This new presentation was planned to re-align the art of the Victorian period with the Museum’s mission to “connect people to art, offering an inclusive and essential community resource.” Curators were challenged with developing a narrative identifying those points of connection ― to rethink the presentation of ﬁne and decorative art created during a period of unfettered imperialist expansion and colonization; unrestrained industrial growth and associated pollution; and rising social and economic disparity. Points of alignment with present day political, cultural and social circumstances demanded a new approach to display. Rigorous re-examination of the rhetoric of traditional presentations was viewed as imperative, with new emphasis placed on shared points of contestation and concern. In the present day, museums ﬁnd themselves in a particular position of relevance as a community locus, offering forums for dialogue, the opportunity for broader conversations extending beyond borders, oceans, and centuries. The intent of the Delaware Art Museum’s reinstallation is to create a space for a reconsideration of today in the discovery of share points with the past. The reinterpretation process invited community input to identify particular points of connection. Through this dialogic process speciﬁc works of art which held particular resonance were identiﬁed. These works were then re-interpreted and re-contextualized within the design. I will present the process and end-result of this project. 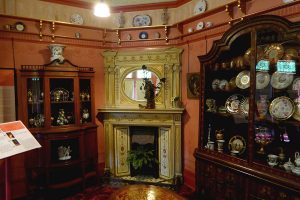 The Boudoir in the Russell-Cotes Art Gallery and Museum, Bournemouth. From Wikimedia.

In 1897 Merton Russell-Cotes, hotelier extraordinaire, planned the house of his dreams, East Cliff Hall. Completed in 1901 as a birthday gift for his wife Annie, the house was crammed with the couple’s collections which had formerly graced the Royal Bath Hotel. Here they created a sophisticated ambience for the hotel’s elite clientele which included Oscar Wilde and Prince Oscar of Sweden. Relocated to East Cliff Hall these objets d’art continued to be prized for their decorative effect, contributing to an ensemble known at the time as a House Beautiful. In 1908 Merton and Annie gifted the house and much of the contents to the city of Bournemouth. With three purpose built galleries added, the Russell-Cotes Art Gallery and Museum was ofﬁcially opened in 1919. As a public institution the mission of the Russell-Cotes became clouded: was it intended to embody Victorian taste in interior décor as an art gallery or a museum? Furniture and ceramics told different stories as mementoes and souvenirs adding to Merton’s and Annie’s history and as culturally valuable artworks placed in an art historical framework/hierarchy and subject to cross-cultural, colonial interpretations. There are plenty of “unsung heroes” at the Russell-Cotes, as Merton collected commercial manufactures: one looks in vain for Morris and Dresser. Rather one ﬁnds Royal Worcester and Crown Derby, alongside Parian and Bisque ﬁgures. In my paper I track the presentation of selected objects from hotel curios to culturally valued works of art to illustrate the rhetoric of display. 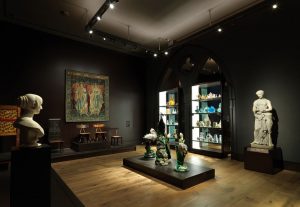 In this presentation I will highlight the Met’s new British Galleries and provide a summary of both the curatorial and the design decisions that were the foundation for this large renovation project. The new galleries seek to present the history of British decorative arts in a more nuanced light, focusing particularly on the creativity and entrepreneurship of British manufacturers. The goal of the curatorial team, which initiated this project, was to move away from a traditional presentation of their collection in the context of aristocratic patronage and the British country house (very much in the vain of the “Treasure Houses of Britain” exhibition, mounted at the National Gallery of Art in Washington in 1985) and to tell the story of the international cast of characters that markedly shaped British design over 400 years. The new physical and intellectual interpretation of the Met’s collection of British furniture, sculpture and decorative arts is designed to allow for a dynamic and ever changing display that will keep both the museum and its visitors engaged in ongoing cultural discussions.

Next: Material cultures of the interior