A recent call for papers used a term that is new to us here at Home Subjects: “style cohabitation.” The study day at the  Institut National d’Histoire de l’Art in Paris will “question the adaptation in domestic spaces, as a common and pragmatic custom, of objects that originally were not destined to meet, playing despite or with their differences.”  The topic was inspired by an exhibition staged in 2014-5 at the Galerie des Gobelins , a temporary exhibition space adjacent to the historic tapestry factory Manufacture des Gobelins.  The exhibition “A tables avec le Mobilier national! – un demi-siècle d’existence de l’Atelier de Recherche et de Création” celebrated fifty years of the Atelier de Recherche et de Création.  The ARC was founded in 1964 by André Malraux, then Minister of Cultural Affairs, to oversee the furnishings and decorations of official buildings and to promote the creation of new furniture.  They encourage state patronage and also seek to incorporate contemporary forms into historical settings. 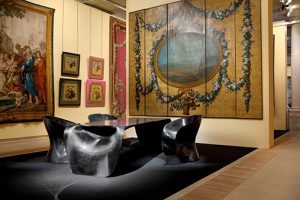 At “A tables avec le Mobilier national!,” visitors were treated to the incorporation of contemporary furniture into the historical galleries showing “Les Gobelins in the Age of Enlightenment – A Golden Age of Royal Manufacture.”  The display presented the work of the ARC as part of a national tradition of artistic patrimony and heritage that reached back to the Enlightenment.  For the organizers of the upcoming event, the exhibition disrupted the idea of the gesamtkunstwerk or “total work of art.”  Instead what emerged were “unexpected, sometimes surprising, convergences.” 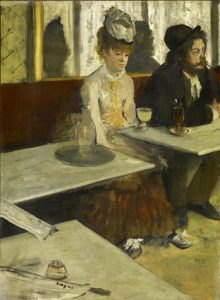 This call reminded us that collecting and displaying art in the home has always been a project of “style cohabitation,” even when patricians in ancient Rome displayed Greek statues.  As modern art developed in the early twentieth century, however, critics began to worry that it was a decidedly anti-domestic enterprise.    The arts and crafts designer Walter Crane famously criticized Degas’s In a Café (The Absinthe Drinker) when the work was on public display in London in 1893.  As Crane asked readers of the Westminster Gazette, “How could one live with such a work?” Defenders of the painting derisively referred to this as “the Walter Crane co-habitation test,” but Crane’s criticism nevertheless highlights an important point that is often lost on contemporary visitors to museums: most works of art were intended for domestic display.

This same idea re-emerged when Roger Fry staged his First and Second Post-Impressionist Exhibitions at the Grafton Galleries in 1910 and 1912, respectively.  According to the novelist Theodore Dreiser, the art dealer Lane articulated his feelings about the Post-Impressionists at a dinner party in 1912, when Fry’s Second Post-Impressionist Exhibition was then on view.  Although his friend Philip Wilson Steer had sent Lane a positive report from Fry’s First Impressionist Exhibition in 1910, praising Manet and Cézanne , it  is unknown how Lane himself responded to the exhibition.   In the wake of the second exhibition, Dreiser asked Lane for his thoughts on Post-Impressionism in general, and, according to the novelist, Lane issued a condemnation:  “They neglect the high significance of temperament completely.  Art isn’t for barbarians, even if they manage to attract attention.  They may overrun us for the time being, but they cannot establish their loud braying as art singing. “ Although he was willing to admit that “Picasso can paint to a certain extent,” Lane asserts that he and many of the artists in Fry’s exhibition lacked refinement.  Lane wanted a gentlemanly art.

This conversation on the latest styles in contemporary art then turned to the display of art, especially the place of art in the home.  Lane’s friend and fellow collector, the Irish-American lawyer John Quinn filled his apartment on Central Park West in New York with works by Picasso and others, Lane asserted that, “I do not like syphilis in my parlour.”   This sentiment is surprising from an admirer of Manet’s art (did Lane know of Manet’s syphilitic condition? Perhaps George Moore told him).  But his declaration reveals the limits of his admiration for modern art, especially when it comes to home decoration.  Manet and Impressionists like Monet and Renoir could be considered under the rubric of decoration, but Lane acquired these works with the Municipal Gallery of Modern Art in mind.  When it comes to more recent art, however, Lane echoes the popular disparagement of such works as “diseased.”   As such, they have no place in the home; in other words, such paintings are literally indecorous.  May Morris, the daughter of the Arts and Crafts designer William Morris, concurred, writing to John Quinn that it would be difficult to live with the works in the Post-Impressionist Exhibition. 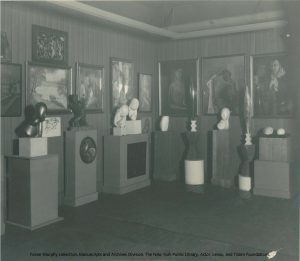 Photography of art work in the collection of John Quinn, to be auctioned after his death. NYPL.

Quinn, however, remained intrigued and continued to collect modern art for display in his home.  Perhaps the most notable example of this kind of “style cohabitation” is the collection assembled by Samuel Courtauld, the textile magnate, who was inspired by Hugh Lane’s own collection of Impressionist paintings.   He displayed his collection at Home House at 20 Portman Square, with interiors designed by Robert Adam.  His younger brother Stephen Courtauld likewise engaged in his own version of such cohabitation, converting the ruins of the medieval Eltham Palace into an Art Deco fantasy, but he did not emulate his brother’s interest in collecting art.

Perhaps the closest analog to the ARC project in the British context is the continued life of country houses.  As Country Life pointed out in 2013, “Country house owners have always wanted art to furnish their rooms, but there is an increasing new appetite for a space that can be adapted to form an art gallery that has been driven by the dramatic rise in the popularity-and prices-of contemporary art over the past two decades.”  Yet the scope and scale of many blue-chip works of contemporary art can present a challenge to the historical interior.  As the magazine acknowledges,  “A masterpiece by Anish Kapoor, Jeff Koons or Gerhard Richter is a coveted status symbol for the very affluent, but these artists didn’t have traditional country-house settings in mind when they created their works, which are often really large: they envisaged the big white spaces of the contemporary public or commercial art gallery, and this can pose a challenge to private collectors.”

Works by Anthony Caro on display in the gardens at Chatsworth.

It remains to be seen whether such works will be successfully integrated into the historic interiors at country houses and estates.  Some have resolved this issue through the display of contemporary art outdoors, as in the sculpture displays at Chatsworth.We look forward to the exciting new research that will emerge from the event in Paris in May 2018.

Next: Lawrence Alma-Tadema: At Home in Antiquity