What Lies Before Hell: Stothard’s Hell Staircase Paintings and the Burghley House Collection

This week we feature a guest post by Rachel Rhine, a graduate of Wake Forest University in 2015  who recently received her MA in art history from the Courtauld Institute with a thesis entitled “The Painter, the Patron, and the Staircase to Hell: Thomas Stothard’s Staircase Series at Burghley House.” 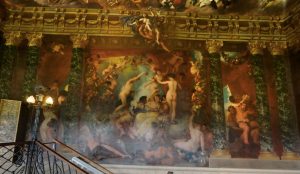 In 1799, the artist Thomas Stothard was given a puzzling task: to complete a passé decorative scheme begun at Burghley House near Stamford in the preceding century.  Today’s visitors proceed through Burghley House near Stamford in Lincolnshire in a similar manner to their 18th century counterparts. After ascending the grand staircase, they traverse through the staterooms, viewing Old Master paintings, lavish furnishings, and elaborate ceiling or wall paintings by Antonio Verrio and Louis Laguerre before emerging into the Hell Staircase. 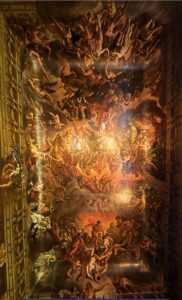 The three murals, Orpheus and Eurydice, Intemperance (Marc Antony and Cleopatra), and The Horrors of War (1799-1804) in the Hell Staircase at Burghley House were painted by Thomas Stothard for Henry Cecil, the 10th Earl of Exeter (1754-1804) to accompany Antonio Verrio’s ceiling which depicted Tantalus (Figure 4, 1697).  However, in the century between the commissions, elaborate wall and ceiling paintings such as Verrio’s had fallen out of style.[1]

By 1799, Burghley House contained an immense collection of Old Master paintings, amassed over the course of several generations. The largest assemblage had been acquired by John, 5th Earl of Exeter (1648-1700) who, in 1686, had also commissioned Louis Laguerre to complete wall and ceiling paintings in the Bow room and Antonio Verrio to paint the stateroom ceilings and the walls of the Heaven Room and Hell Staircase, as was the fashion in the period.  Yet, the Hell staircase’s walls were left unfinished with only the trompe l’oeil columns completed. This deficiency became apparent when the 9th Earl installed a modern double geometrical staircase, based on designs by architect Robert Adams, under Verrio’s hell ceiling. 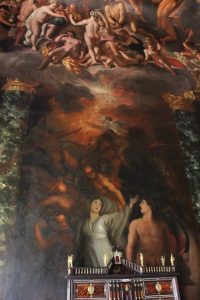 By removing the majority of the mezzanine that formerly ran around the room,this alteration changed the orientation of the space  and drew attention to the unfinished walls. Furthermore, the new two story layout disrupted the logic of trompe l’oeil’s one story colonnades. This presented his heir, the 10th earl, with the opportunity to commission his own contribution to the house. Furthermore, since the hell staircase was one of the final rooms open to visitors, by finishing the scheme, Cecil ensured that visitors would leave the estate with the knowledge of his artistic patronage and dedication to the legacy of his ancestors. 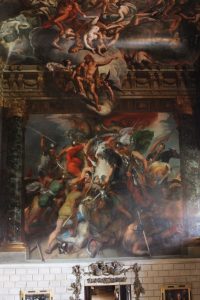 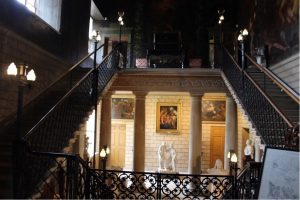 This presented his heir, the 10th earl, with the opportunity to commission his own contribution to the house. Furthermore, since the hell staircase was one of the final rooms open to visitors, by finishing the scheme, Cecil ensured that visitors would leave the estate with the knowledge of his artistic patronage and dedication to the legacy of his ancestors. 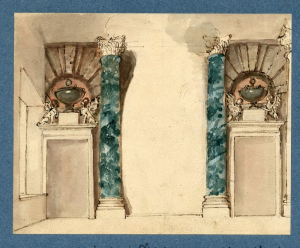 Stothard chose to use the existing trompe l’oeil  as a frame work for his individual works and use Verrio’s Hell as an inspiration from which to produce his own subjects. Verrio’s Tantalus depicts a dark, hopeless world filled with individuals who were punished by the gods for sins such as heresy and murder, with each partaking of their punishment as decreed in classical mythologies. Rather than continue to depict hell, Stothard diverged from the theme and depicted one mythological scene from the underworld (Orpheus) and two sins: Intemperance and violence without reason (Horrors). Furthermore, the stories of Orpheus and Eurydice, and Marc Antony and Cleopatra continued the theme of love and virtue that extends throughout the seven decorated rooms prior to the Hell Staircase, particularly the discovery of Venus and Mars’ adultery in the Heaven room (1686-1697). 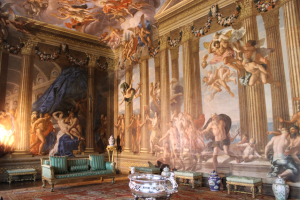 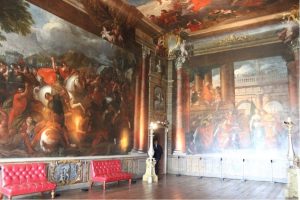 Not only did Laguerre also depict a scene of war- the historic Battle of Cannae- he portrayed the story of Marc Antony and Cleopatra. Beyond the analogous narrative, a notable aspect of Laguerre’s mural is his unusual decision to depict the Egyptian queen as blond, a choice replicated by Stothard. Beyond these connections to the earlier decorative schemes, Stothard referenced the family’s overall collection by painting in the style of Old Masters.

The renown of the collection attracted visitors to Burghley throughout the eighteenth century and even necessitated a guidebook by 1797. This piece focused on the collection and highlighted the Old Masters works, mainly by Italian artists.[2] The 1797 guidebook positions the collection as a paragon of taste and importance. Stothard’s paintings provide a visual companion to the accolades of these texts. Each of the paintings in the Hell staircase invokes the style of celebrated earlier artists or schools. Orpheus mimics the Bolognese school, Intemperance references the Venetian School, and both Intemperance and Horrors allude to Ruben’s works. By invoking the styles of Old Masters and works in the collection, Stothard signaled the importance of Burghley’s collection as a whole to various onlookers.

By the time visitors had reached the Hell Staircase, they would have traversed the length of the suite and could easily associate these figures with those they had seen in the previous rooms. For example, the particularly strong selection of Venetian works compliment the rich coloring as well as the iconography of Intemperance. This painting’s ornamental style recalls Venetian works such as Pietro Liberi’s Logic between Vice and Virtue (before 1684) 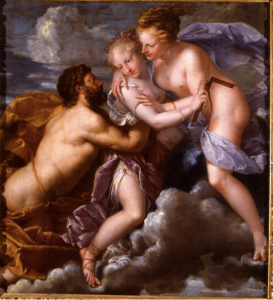 while its bacchanalian subject conjures the memory of other works that indulge in scenes of pleasure including Johann Carl Loth’s Solomon’s Idolatry (before 1684). 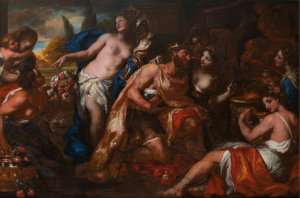 Although we should not assume that Stothard intended to quote specific works from within the collection, the artist surely drew upon their themes and general iconography in such a way as to allow the viewer to make these associations themselves and reminded them of earlier works and the Earls who either purchased or patronized them.

In creating his decorative programme, Stothard emphasized both the renown Old Master collection housed at Burghley and the role of the Cecil family as patrons of art.

[1]For the initial attack on decorative wall paintings see Earl of Shaftesbury (Anthony Ashley Cooper). Charateristicks of Men, Manners, Opinions, Times in Three Volumes, Vol. III (London: 1733), 347-348; For analysis of Shaftesbury’s impact on decorative painting and Verrio’s reputation see Richard Johns, “Those Wilder Sorts of Painting: The Painted Interior in the Age of Antonio Verrio,” in A Companion to British Art: 1600 to the Present , edited by Dana Arnold and David Peters Corbett (Wiley-Blackwell Publishing Ltd, 2013),79-104

[2] If interested please see Sharp, Stamford; A History or Description, 1797 and Thomas Blore, A Guide to Burghley House, Northamptonshire, the seat of the Marquis of Exeter; containing a catalogue of all the paintings, antiquities, &c. With biographical notices of the artists (Stamford: J. Drakard, 1815) avalaible through JSIC Historic Texts.  These guides include works attributioned to Veronese, Rubens, and Leonardo. The Veronese works were correctly attributed while the Leonardo and Rubens were not. While the attributions may have been mistaken in some cases, what is important for our purposes is that the viewers were concerned with the artists they believed were there.