Editors’ Note: Today we present the final post in a series written by speakers in the upcoming Home Subjects session at the CAA meeting in New York, which will take place on February 12. Today’s guest post is by Nicholas Tromans, Curator of the Watts Gallery in Guildford, Surrey. 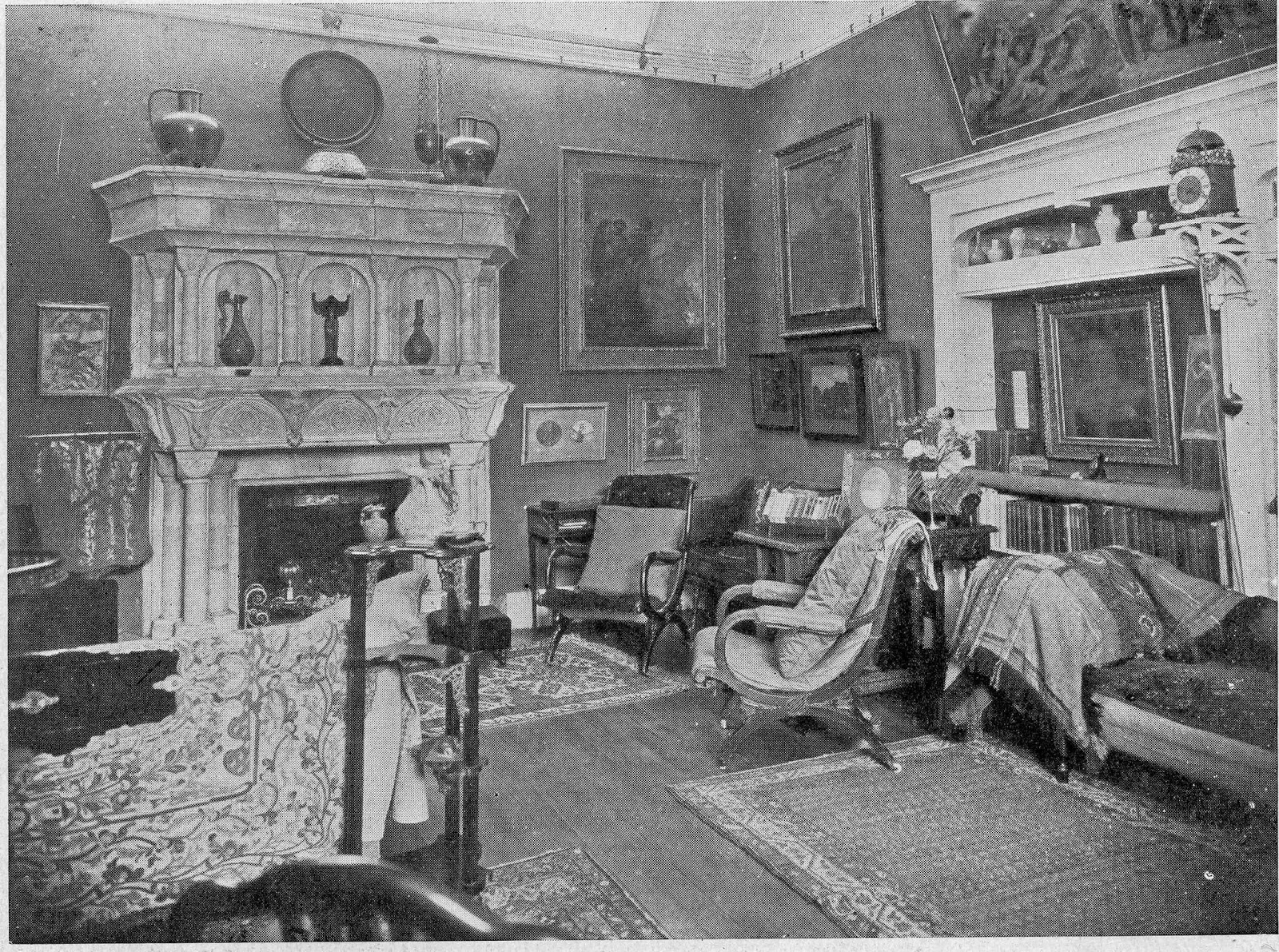 Drawing Room at Limnerslease, 1913. This room had many lives – as a music room, as Mary Watts’s Home Arts and Industries classroom, as G. F. Watts’s ‘overflow’ studio and – when other uses permitted – as a Drawing Room. From 2015 it will have yet another identity as a new public Gallery space, devoted to the art and design of Mary Watts.

The British painter and sculptor George Frederic Watts (1817-1904) was an artist whose huge reputation around 1900 was, it could be argued, based on ‘art in the home’. For such a Titan of the Victorian art scene, he enjoyed relatively little success at the annual London exhibitions. Instead, his mass-reproduced allegorical subjects such as Hope, Love and Life and The All-Pervading were to be found in ordinary homes around the world, accepted as secular icons of high-minded agnosticism. Watts was the master of the suburban sublime.

Watts himself had never tried hard to separate out his work spaces from his domestic arrangements. The latter indeed simply fitted themselves around his studio practice. For some twenty-five years he lived and worked as a house-guest of the Prinsep family at Little Holland House in Kensington, London, where the haunt of the anchorite-artist was a highlight of a visit to that Bohemian private house. Watts would later open his own house in Kensington to the public on Sunday afternoons.

Following his marriage to the designer Mary Seton Fraser-Tytler in 1886, Watts came to spend more time in the countryside, at Limnerslease in Compton outside Guildford in Surrey. Mary Watts felt her ageing husband needed some help in focusing on the major works he still had in hand – hence the name of the house, suggesting a new dose of vitality for the artist. As Watts evolved his final Symbolist masterpieces, and Mary developed her Compton Pottery enterprise, they collaborated on the design of another new extraordinary building, across the lane from Limnerslease, which – in the Watts tradition – was to be both a residence and a picture gallery. The Hostel, as it was originally known, housed both the male apprentices of the Compton Pottery and a suite of spaces in which to show works by the great old man, who lived just long enough to see the building open in 1904. The Hostel-Gallery was designed in an Arts & Crafts style by a local architect, Kit Hatton Turnor, who had trained under Edwin Lutyens. After the Pottery closed in the 1950s, the building was given more fully over to the art collection, although Gallery staff have always continued to live on site.

Much research has been done to recover the early history of the building, although it has been hard to discover much first-hand evidence of what it was like actually to live there. The apprentices were provided with dormitories, kitchen, dining and recreation rooms, while a narrow corridor – in effect a service passage – connected the domestic spaces so as to make it possible for everyday life to carry on without unduly impeding the visitors studying the pictures in the galleries. It was a peculiar, perhaps unique, arrangement: a utopian craft community living – literally – around the legacy of a great artist whose works were intended, among other things, to inspire the youngsters to offer The Utmost for the Highest (as Watts’s motto had it).

Previous: Gustav Waagen and Treasures of Art in Great Britain

Next: A Look Back and Ahead: Reflections on Display, Collecting and Social Class