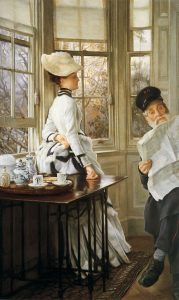 A number of announcements and opportunities have recently crossed the desk at Home Subjects, and we thought they would also be of interest to you, dear reader.  We chose this lovely Tissot painting as our key image for “news,” although it also seems to cry out for the Men to Avoid in Art and Life “meme” treatment.

There are a number of sessions that will be of interest at the College Art Association Conference, February 10-13, 2021.  These include the Historians of British Art Session, chaired by Julie Codell, entitled “A New Story about British Culture? The Rhetoric of Display” and “William Morris Today,” organized on behalf of the William Morris Society in the US by Morna O’Neill (apologies for the shameless plug).  We welcome submissions from artists and designers, as well as a wide array of scholars.  All sessions and business meetings will be held online.  The full list of sessions and further information about how to submit a proposal can be found here.

What roles have objects, which have long been deemed as ‘superfluous’, played in shaping and negotiating our political, social, and economic needs, wants, and desires, both past and present? With the aim of expanding the parameters of the British decorative arts, we invite papers that explore topics on an array of materials, including textiles, dress, popular and luxury objects and furniture, from the fifteenth century to the present. Beyond the decorative arts’ traditional framework of taste, style and patronage, the issue is meant to encourage reflection on the politics, economics and social aspects of the decorative arts. How can we put terms such as the necessary and the superfluous, refinement and exploitation, or labor and sensibility, into new and productive relationships through a historical and theoretical reassessment of the decorative arts? How might our current political, social and economic crises provide new angles for exploring—or exploding—the myths of the past? We invite proposals from museum curators, public historians, art historians, cultural critics and students to explore topics related to the British decorative arts, including but not limited to: production, consumption, exploitation, exclusion, scarcity, extinction, depletion, resource extraction, recession, depression, inflation, labor, automation, protest, dissent, consent, needs, wants, and finally, desires.

As a prelude to the special issue, a provocation and series of short responses on this subject, in response to the specific theme of ‘luxury and crisis’, appeared in Issue 16 (June 2020) of British Art Studies.

Please submit abstracts of 200 words or less to the editors at [email protected] by Tuesday, 15 September. We will notify accepted papers by Tuesday, 6 October. The standard length for scholarly articles ranges between 6,000 and 9,000 words, and other formats are considered when appropriate to the nature of the content. Stills, moving images, 3D models and audio tracks can all be included as illustrations, and proposals that engage with the digital possibilities of the journal platform are encouraged.

British Art Studies is an open access and peer-reviewed journal co-published by the Paul Mellon Centre for Studies in British Art, London, and the Yale Center for British Art, New Haven. Since it was established in 2015, it has published scholarship on all aspects of British art, architecture and visual culture, from the medieval period to the present day.

In a recent review in The New York Review of Books, Kate Bolick, former executive editor of Domino, reflected on her time at the shelter magazine: “I never lost my visceral dislike of how professionalized taste-making twists a fundamental human appetite for ornament into yet another locus of anxiety.”  As an antidote to this feeling, she commends the essays collected in Lives of Houses, edited by Kate Kennedy and Hermione Lee.  The book grew out of events organized by the Oxford Centre for Life-Writing, founded by Lee at Wolfson College in Oxford.  The essays examine our collective fascination with the domestic spaces of notable artists, writers, composers and politicians.  While none of those featured in the volume were notable art collectors, they were all individuals who were often able to rise above–or overlook–any anxiety over home decoration and the judgement of good taste.  They should be an inspiration to us all.

Next: ‘Adapting to Survive’ and Thrive: Interpreting Eighteenth-Century Reality in the Twenty First-Century Virtual Realm