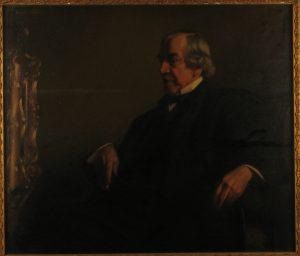 An announcement crossed our inbox recent that might be of interest to readers of “Home Subjects:” a session entitled “The Collector and Cultural Narratives, 1845-1918,” to be chaired by Julie Codell and the Southeastern College Art Conference.

Examining the cultural impact of these studies, panelists may consider questions such as (but not limited to):

Graduate students are encouraged to apply. Travel awards are possible. See conference website at www.secacart.org. Proposals must be submitted at conference website. https://secac.secure-platform.com/a/account/login

Those engaged in “Home Subjects” might find an opportunity to present their own research, as the domestic display of art is usually central to the formation of a private collection, situating the domestic interior as a key space in art history.  In addition, the call brings to mind portraits such as George Henry’s rendering of James Staats Forbes from 1903 (Dublin City Gallery The Hugh Lane).  Most portraits of connoisseurs and collectors from the early twentieth century show them considering some prized object of great beauty.  In the case of Henry’s portrait of the railway engineer and collector James Staats Forbes, the sitter focuses his concentrated gaze on a small painting within an elaborate gold frame.

Staats Forbes, who was born in Aberdeen but lived and worked in The Hague at mid-century, began to acquire Hague School paintings and, later, Barbizon paintings by the 1850s.  By the time of his death in 1904, the railway engineer left behind a collection of more than 4,000 works of art with a focus on the Barbizon school and nineteenth-century Dutch art.   As Sarah Herring has demonstrated, Staats Forbes was one of the first British collectors to appreciate the Barbizon School and acquire their work in great numbers; in fact, there was the popular perception that he was buying in bulk.  As Kenneth McConkey observes, “Forbes’s collection was so vast that it was serialized in The Studio over three issues, and his family, at the time of his death, feared that it would flood the market if released into the saleroom all at once.” The collection was so vast that it has to be relocated from his home, and the pictures reportedly filled a storage space near Euston Station. The subsequent distribution of his estate would allow many works by artists such as Corot to enter public collections.  His executors hoped to sell the collection in groups, and they were eager to place them in public collections (in fact, the art dealer Hugh Lane would acquire many of them for the Municipal Gallery of Modern Art in Dublin).  Although the collection is dispersed, and we might consider James Staats Forbes a minor figure in most art historical narratives, his collecting activities were central to the status and reputation of the Barbizon School in the early twentieth century.  We hope that this conference session will focus attention on figures such as Staats Forbes and the important roles played by collectors in shaping art history.

Any questions about the session can be directed to Julie Codell: [email protected]

Next: “Looking Out, Looking In” at Association for Art History 2018