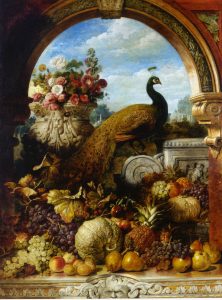 John Radcliffe and Mark Lance recently published George Lance: Victorian Master of Still Life (Philip Wilson, 2016), the first major study of the artist known in the 1840s as the “The King of Still Life Painting.” The authors are both descendants of the artist, and thus the book features many beautiful color reproductions of works that remained with the family or in private collections. One painting that particularly caught my eye was Harold, a painting of a peacock and table laden with fruit. It was a commission from the prosperous railway contractor Edward Ladd Betts to decorate the dining room at Preston Hall, his home in Aylesford, Kent. (The firm of Peto, Betts, and Brassey constructed the Grand Trunk Railway in Canada.) Kenneth Ames has written about the pervasive presence of moralizing motifs in Victorian decorative schemes, the “death in the dining room” brought by so many sideboards carved with scenes of animal slaughter. Who was Harold the Peacock, and what did he bring to the dining room?
George Lance (b. 1802) trained with the history painter Benjamin Robert Haydon for seven years, an apprenticeship ending in 1823. He is supposed to have discovered his talent for “fruit painting” by accident as he was planning a subject from The Iliad, Haydon set him the task of copying objects from nature to improve his ability to finish the work. A focus on still life painting allowed Lance to corner a market; he did not come from great wealth, and he would have known of Haydon’s own experience with debtors prison in pursuit of the cause of history painting. Lance exhibited his work at the British Institution as well as the Royal Academy and also regional academies like the Manchester Institution and the Liverpool Academy. By 1846, the Illustrated London News called him “The King of Still Life Painting.” Fruit: The Summer Gift (Tate) from 1848 is typical of his work: a virtuous handling of the different types of fruity surfaces, from the knobbly pineapple to the waxy plum, a perspectival plenty that always threatens to spill forth into the viewer’s space. Lance was a prosperous and successful artist from the 1840s until his death in 1864. 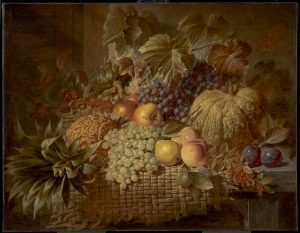 Still life painting in general and fruit painting in particular occupied an uneasy place in the Royal Academy hierarchy. Still life painting was considered the least elevated or refined mode of art, requiring only the artist’s attention to inanimate objects devoid of emotion and narrative. Both Sir Joshua Reynolds and John Ruskin associated Dutch still-life painting of the seventeenth century with “manual dexterity” in disparaging terms. Yet the growing admiration for Dutch art in the mid-nineteenth century suggests that still life could occupy a status above its Academic rank.
In this regard, Lance’s Harold emerges as a pointed statement about the value of still life painting. Lance elevated the literary pedigree of the painting by exhibiting it with a line from Shakespeare’s Hamlet, “And now reigns here a very, very peacock.” 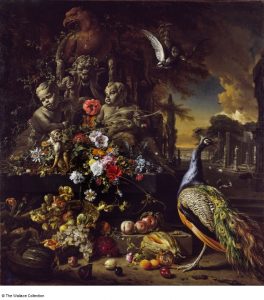 Jan Weenix, “Flowers with a Fountain and a Peacock,” c. 1700. Wallace Collection.

Contemporaries noted the relationship between this composition and a work by the celebrated Dutch master Jan Weenix, his Flowers on a Fountain (c. 1700, Wallace Collection, London), whose composition shows a peacock preening amidst an array of ripe fruit. The eyes of peacock’s feathers feature more prominently in Lance’s version. They flow down the center of the composition and call to mind the mythical explanation for their extraordinary appearance: the goddess Hera transferred the hundred eyes of her faithful watcher Argus to the bird. Was this a visual riposte to Sir Joshua Reynolds’s judgement that “it is to the eye only that the works of this [Dutch] school are addressed”? Lance has further asserted his artistic identity by including a grotesque self-portrait as the face on the vase. In Harold, we marvel not only in the natural abundance but also the human artistry on display.
Harold is a depiction of things arranged for the viewer’s attention, and it gives us ample opportunity to think about surface, texture, and sheen. The growing wealth of the middle classes led to a revival of still life painting in Britain in the 1840s and 50s, and this painting seems to be one about wealth made visible. If the Dutch set the example for this type of art in this seventeenth century, then one could argue that the British would naturally follow in an evolutionary model of capitalist societies focused on trade in a global context.

Tempting feasts for the eyes offer up art as artifice. This skill, in turn, becomes a marketing strategy, as Lance’s career as a “fruit painter” suggests.

Next: Domesticity and Orpen’s “Homage to Manet”